Sometimes a dog's color is not obvious on casual inspection and it is necessary to look a little closer in order to identify his color accurately for registration. The following pix are situations where the dog's true color was not obvious at first, or it looked a little tricky for classification purposes. 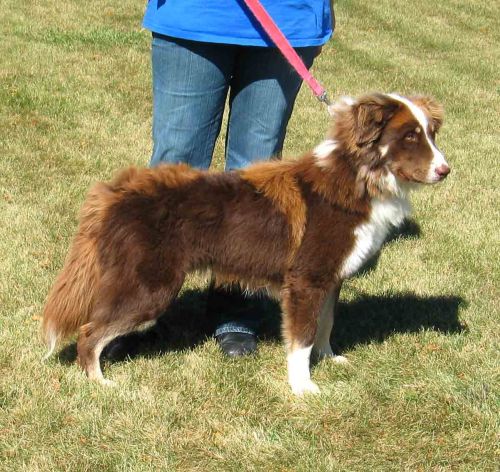 This handsome guy was submitted by Tina Hartley. Is this a merle? He has two definite shades of red in a somewhat regular pattern. Actually, this dog is bleaching and shedding in the early summer. Reds are especially prone to sunbleaching, and this dog's color lightened during the summer to a marked degree. His true color shows on his hips, shoulders, sides, and foreface where the dead stuff has moulted off. His true color is a rich burnt sienna red, not a pale straw red. Once all the dead stuff fell out he turned out to be a very handsome red tricolor. His tan points are not much lighter than his body, so they do not stand out like they would on a black tri. Sometimes puppies can have puppy fluff that suggests a different color than the pup turns out to be once he has shed the fluff around age one. 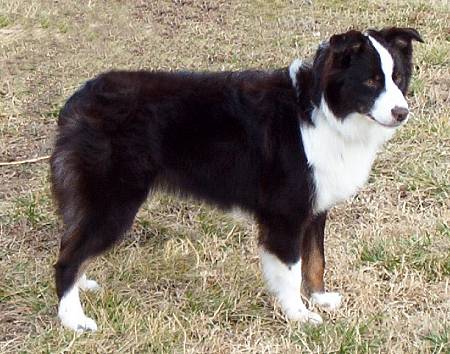 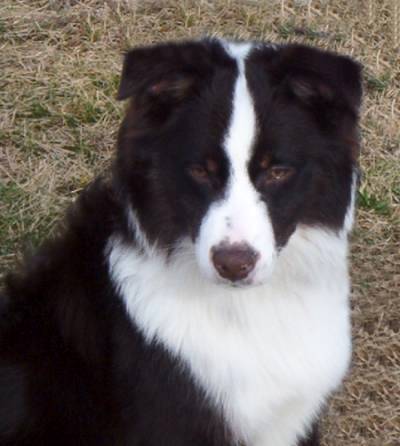 This handsome guy is Overlands Rojo Mojo (Mojo), photos courtesy of Sandy Shepherd. What color is he? He looks black, even in bright sunlight. But the color of his nose leather and eyerims reveals he is actually a very dark, very intense red! Super dark reds like this run in some of the older working bloodlines. They are much more resistant to sun bleaching than lighter shades, and some do not fade at all. 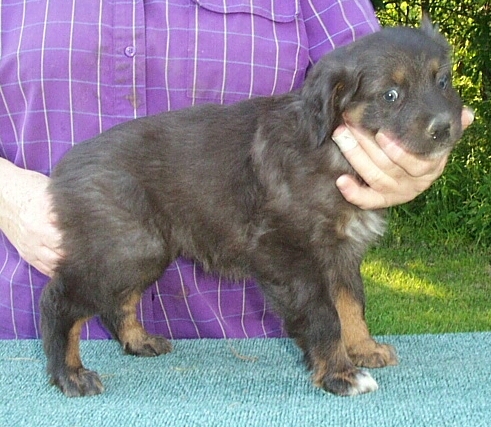 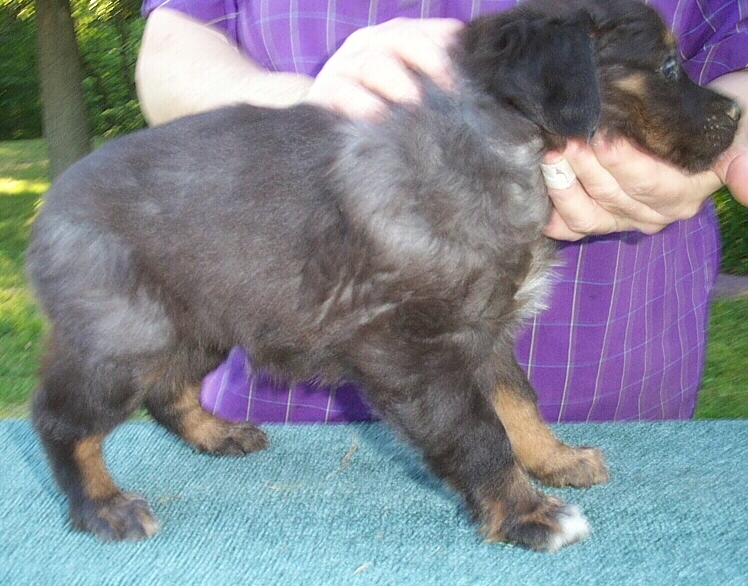 Is this a dilute? This little 7 week lady is a dark red tri with a silver undercoat. In the second photo the hair is being brushed backward on the neck to show the color of the undercoat more clearly. In most Aussies the undercoat is the same color as the guard hairs. When it is not, fascinating two tone effects can result. We can rule out dilute coloration here by looking at her face and ear. This is full intensity dark red pigment, not faded in any way. Sometimes a blue merle or a black will have a buff to brown colored undercoat, causing an overall muddy appearance. You see this occasionally in Rotties and Dobes as well. 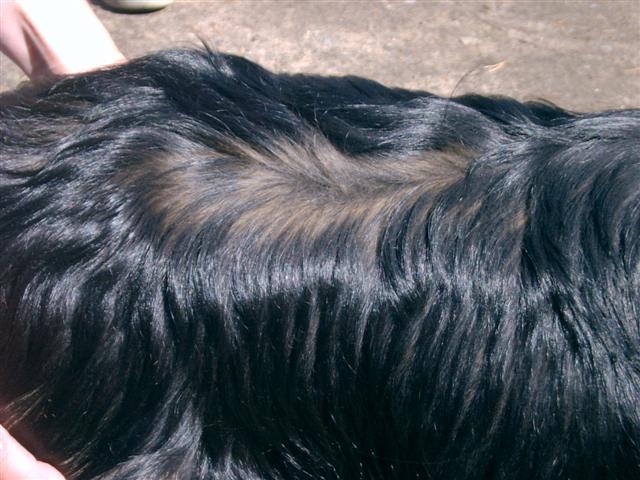 Here is an example of a brown undercoat muddying the overall color of the dog. This dog is a black tricolor from Finland, photo courtesy of Katja Jyrinki. Brown undercoats are often responsible for muddy looking merles as well. It may be limited to one area of the dog's body or the whole undercoat may be buff to brown. Ideally for clear and rich color the undercoat should be the same color as the guard hairs. This is not the same thing as running copper, since it is not limited in area to their location. In reds they are very difficult to identify because of the lack of color contrast with the red guard hairs. The exact mode of inheritance is not known. 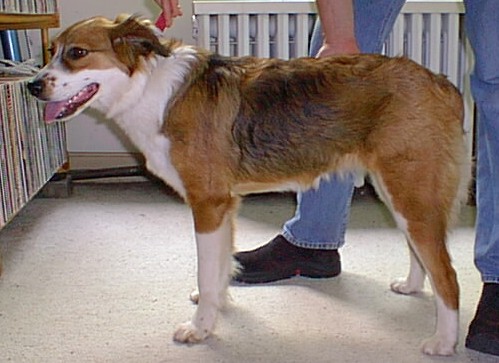 Nico is from known parentage and is an Aussie, photo courtesy of Mary Schubauer-Berigan. So what is Nico? A merle? A sable? Both? Nico is another variation in the A series of alleles. She is a saddleback. Like a GSD or an Airedale, she has her body color reduced to a saddle on her back and sides, while the rest of her is the color of tan points. We know her mother was a blue merle and her father a black tri. She has a black bi sibling. Her probable genotype is (asat  B-  kk  mm). She doesn't show any merling, which would appear as irregular patches on her saddle if present. Her owners could be sure, however, by submitting her cheek swab for a DNA test that's now available to identify the presence of merle. 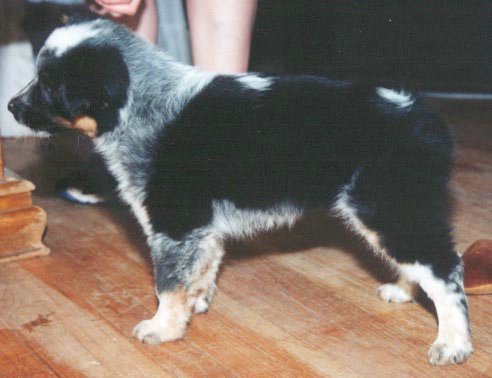 This is also a common source of confusion. Is this a blue merle? Actually, Gypsy is half Australian cattle dog and half Aussie. ACDs are never merles, but they do have very very heavy ticking/roaning in the white areas. It is so heavy that it resembles blue merle as it does in Gypsy here. Because Gypsy is half Aussie, she could have inherited merling from her blue merle Aussie mom. But notice that the "blue" areas are limited to the location of the Irish spotting pattern. Merling is randomly distributed and would not be expected to conform to a regular pattern like this. This pup is a black tri with very heavy ticking. Some pure Aussies have ticking nearly this heavy. 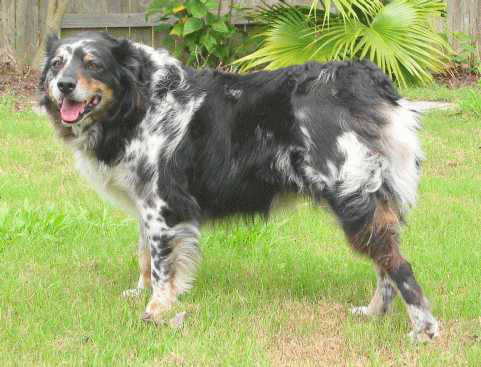 Leo is a blue merle with heavy ticking the size of nickles on his white areas. It's not as heavy as the roaning effect seen in the ACD cross above, but it is heavy enough and the merled areas light enough that ticking can be mistaken for merling. If he were a black tri, the ticked areas might be mistakenly identified as merling and result in him being registered as a merle. The merling is strongest on his hip and face. His muzzle is white and he has a white left foreleg and white collar. Notice that the ticking on his leg follows the location of his tan points. The ticks are black until they reach his wrist, at which point they are tan. 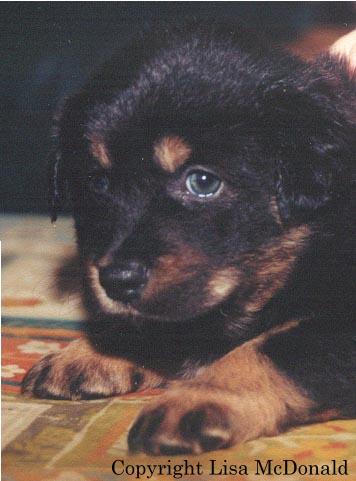 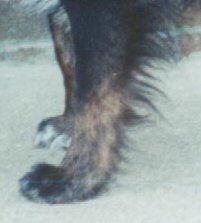 Is this pup on the left a brindle? He does have black marks on his tan points. But notice that the black areas are indistinct smudges. They do not form distinct tiger striping as is seen in the female (closeup of her foot to the right of the pup). The female on the right has distinct vertical black stripes on her tan points. She is a brindle. The pup has "smutty tan points". On a red dog the smutty areas would be red instead of black. 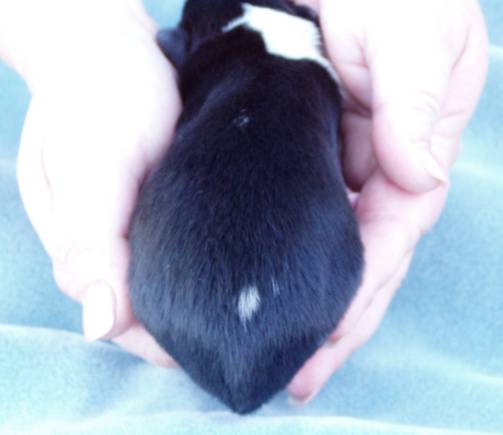 This is a black tri pup with a tiny white spot on his back. Is he a pattern white? Well, technically, he is. The white spot is out of the prescribed area. However, such small white spots often disappear totally as the puppy grows. By the time he is a year old there's no trace of it and he looks like a perfectly marked black tri. But the spot should be noted and the buyer informed it was there. In order to produce a litter with correct amounts of white this pup will need a mate with no such spots. 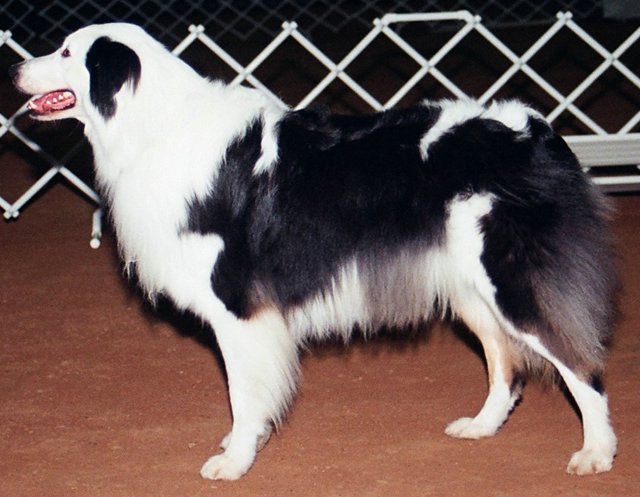 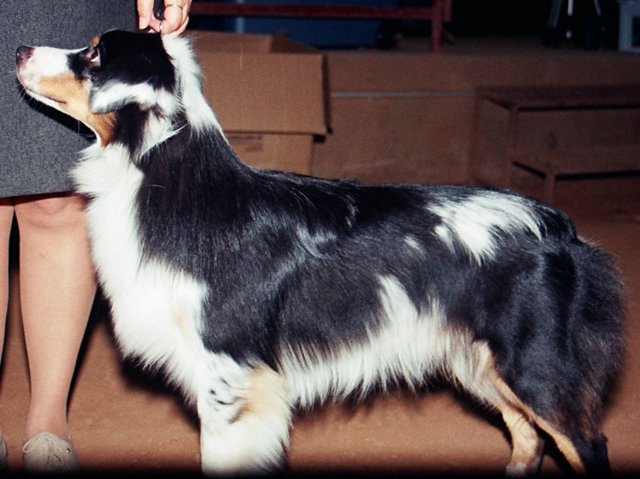 One of these dogs is a pattern white and one is a blue merle. Which is which? Justice, on the left, is a pattern white black tri who competes in agility. The light patches on his back, whithers, and stifle are white with no pigmentation. Moon, a conformation competitor on the right, is a blue merle. She has very extensive black areas and her blue areas are very light colored. But if you compare the blue patch on her rump to the true white of her lower foreleg or throat, the contrast between pigmented and unpigmented hair is clear. The other small white looking patches on her body are also blue, not white. In cases where the merling is light, it is sometimes necessary to riffle through the hair or compare the patch to a known white area. The silver dollar sized patch of blue on Moon's left foreleg is more easily identified as merle because of the marbling effect of light and dark. 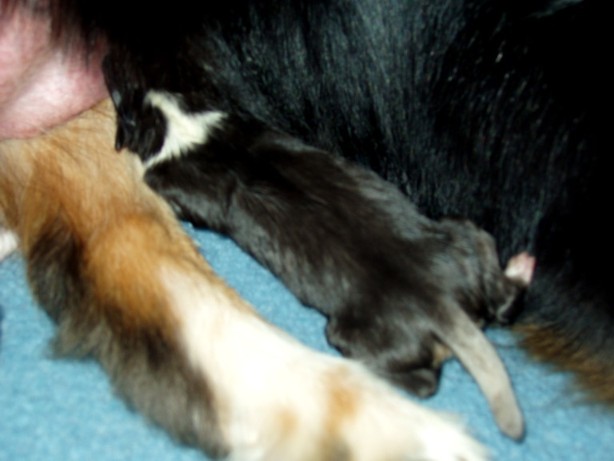 This pup is also discussed in the cryptic merles section. With just a blue tail is he really a blue merle? Yes, if he has even one blue hair he is a blue merle. Once the tail is docked the visual evidence of merling will be gone, but he must still be registered as a blue merle rather than the black tricolor he will then appear to be. Mated to another merle he could produce some homozygous merle pups, even though his amount of merling is very minimal. In cases of question, the DNA test can be done to prove conclusively whether he is a merle or not. 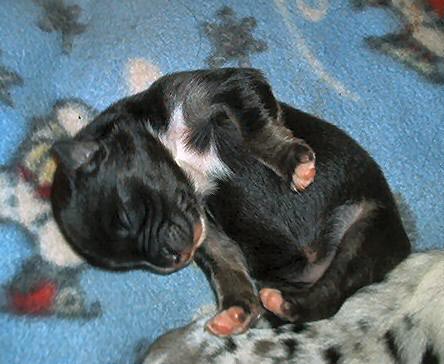 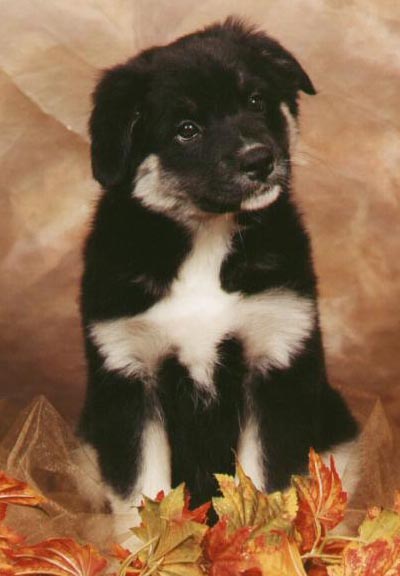 Is this puppy a blue merle? This is Gina (Knoktai Start Your Engines), photos courtesy of Sheila Leonard. The legs and muzzle and shoulder areas look blue in the picture on the left, taken at 2 weeks of age. At birth no hint of color except black was present, and she could have been categorized as a black bi except for the one small tan patch directly under her tail. If a dog has the tan point pattern, if tan is visible nowhere else, it will be visible under the tail. By 9 weeks of age the bluish areas have changed to a light sandy color with no hint of blue. Tan points can appear bluish in some bloodlines as they are just starting to emerge through the body color, though most Aussie pups show clear tan points at birth. Only a few bloodlines have tan points that emerge over the course of a couple of weeks as they did in this puppy.

What about these little guys? Are the two dark ones an off color, or is the light one the one that is off? Actually, the shade of red or blue on a merle can vary considerably. Some dogs have such light merling it looks almost white, and some have a much bluer (or redder) shade. These are normal red merle pups. Two have darker merling than the one in the middle. The middle pup also has a dilute spot in the middle of his back. 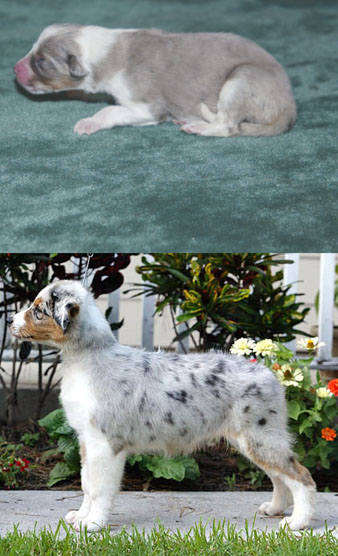 This is a case where a newborn puppy could easily have been misidentified as a dilute, had he not had an experienced breeder (photos courtesy Shelly Hollen). At this age, Mouse does resemble a dilute. He appears to be a uniform shade of gray. You can hardly see the tiny clusters of black hairs at this point. But in the photo below he is approximately 3 months old. Now it is clear that he is a a gorgeous blue merle, not a dilute. His spots are tiny and cheetah-like, rather than the heavy marbling you often see in merles. But both types are acceptable.