Some merles, both blue and red, will have a small patch or two of a color that is an intermediate shade between the darkest and lightest areas. On a blue merle these patches may appear in various shades of medium gray to slate or may even be brownish. On a red merle the dilute area will be an intermediate shade of red. As long as such spots are few, small, and inconspicuous, they may not harm a dog's show or breeding career. Many champions do have one or two small ones. They do become a strictly cosmetic concern if they are very large and/or numerous. See the section on Harlequins and Tweeds where large numbers of regularly placed dilute spots occur on a dog. A brownish dilute spot is not an indicator that a blue merle dog is a carrier of red (red factored). In Rough collies the red allele is not known to exist in the gene pool, yet breeders of blue merles are always concerned about rusty or reddish brown dilute spots appearing on their blue merle collies. The exact mode of inheritance of dilute spots is unknown. However, dogs that have them, especially dogs that have a large number of them, tend to produce them in offspring. It is possible that the trait is carried unseen in nonmerle relatives and only is observed in their merle pups. If one's breeding female has more than a couple of small dilute spots, it would be prudent to choose a male that has few or none. 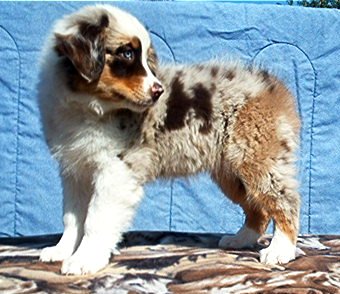 This gorgeous red merle puppy has bright coppery tan points visible on her muzzle and lower rear legs. Her base color is very dark liver, seen in the patch around her eye and the patch on her side. Her merle areas are a much paler liver. On her hip she has a reddish brown dilute spot that is clearly an intermediate shade of liver. Sorting through the hairs would reveal that the dilute spot consists of hairs that are that color of liver; it is not a roaned area like the merle areas are. 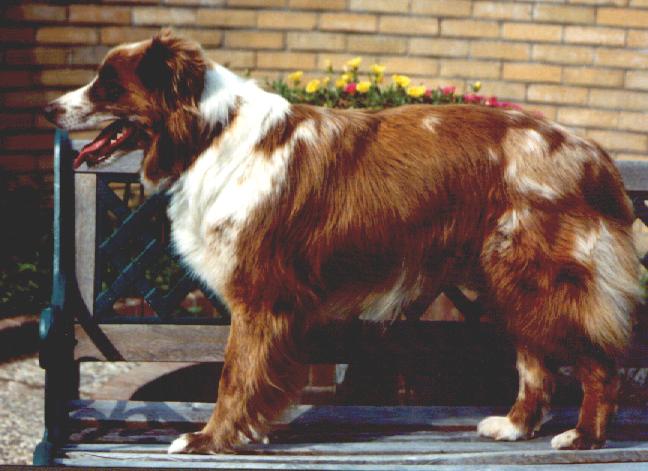 Here is an adult female red merle. Her base coat color is a rich sienna brownish red and her merled areas are actually quite small and very light - almost like the spots on the back of a whitetail deer fawn. They look almost white in the photo, but in fact on direct inspection they are a pale red. She has several dilute spots of an intermediate shade of tan. The two most noticeable are on the top of her hip and on the top of her withers. This girl would be very hard to see in a leaf shaded environment! 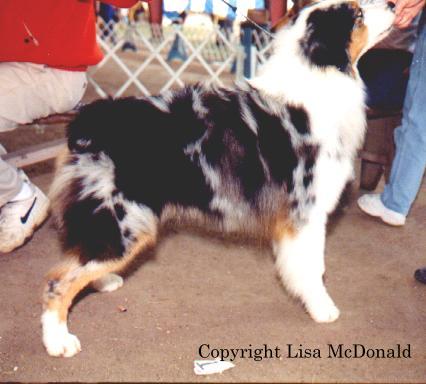 This very handsome show pup, Reverie Raconteur "Randall", is a blue merle with tan points and white trim. He shows some ticking on his neck. For the most part his coat is either black (base color) or pale blue (merling). But he does have a small dilute area right in the middle of his side. The dilute area is very dark gray, almost a slate color. This is pretty typical of what most dilute spots look like. 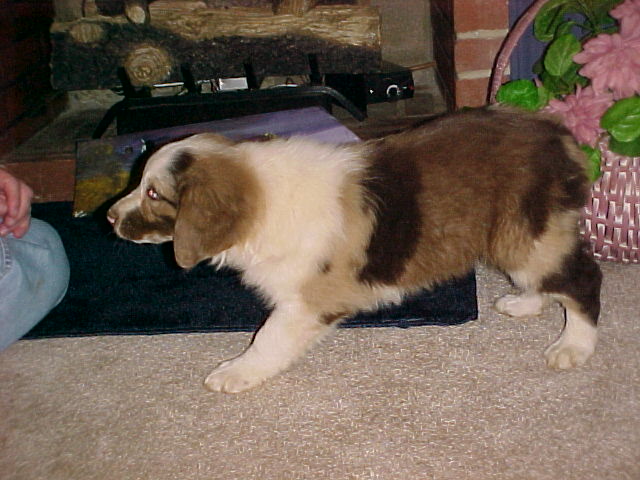 Vision's Steppin' Out of TF "Champ" 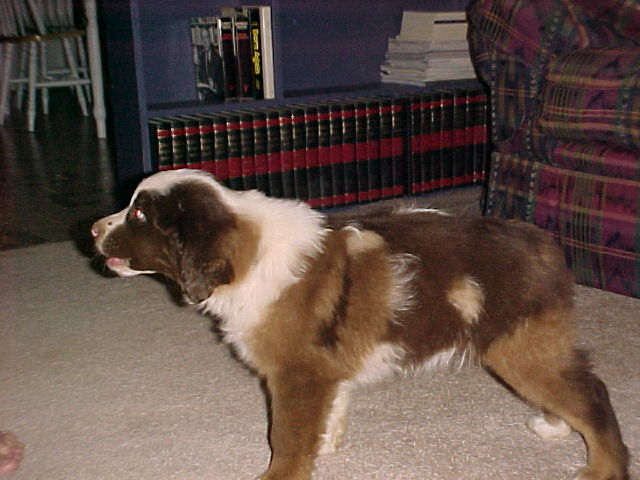 These two lovely pups are Chase and Champ. They are littermates at approximately 9 weeks of age. Both are red merles with white trim. Their base coat color is a nice rich dark burnt sienna and the merled areas are those lightest areas of beige. They each have one intermediate color that appears in several areas on the body. Chase (top) has these dilute spots on the face, ears, and body. Champ (bottom) has them on the neck, forequarter, front of rib cage, and lower rear leg. Because these dilute spots are large and are distributed in a fairly regular pattern, these pups could fit the description of tweeds, and they will also be discussed on that page. Tweeds generally have 2 or more intermediate shades, but they are regular in distribution like these pups have. 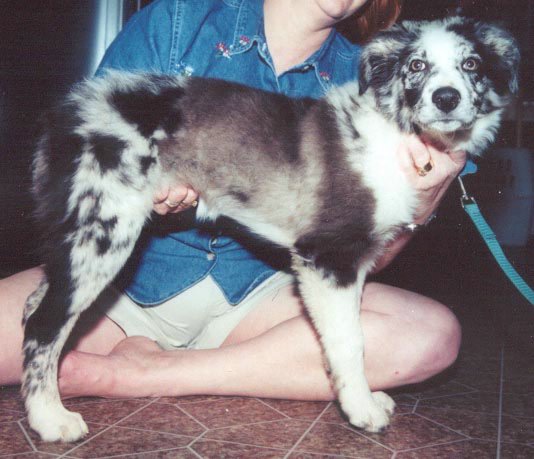 This cute youngster is a blue merle. He has the biggest dilute spot I've ever seen! He wears it like a dinner jacket. It covers his shoulder, sides, top, and extends to the hip. It is an intermediate shade of gray, though in many blue merles the dilute spot can also appear reddish to brownish. Most are much smaller than this. It appears in the photo that the dilute spot has a different texture or length than the surrounding hair, but a hands on exam showed this was not the case.