Commonly called the Maltese dilution, or MLPH, this recessive gene is one of the most common mismarks in Aussies. It acts on black and liver hair; tan points are unaffected. A black dog becomes a slate blue like a blue Dobe. A red dog becomes a beige like a Weimaraner. In a dilute blue merle Aussie the darkest color will be slate rather than black. Usually the nose on a dilute is slate or light liver, but this is not a reliable indicator of dilute status - the nose leather can be dark in some specimens. The eyes of a dilute are usually somewhat lighter than those of non dilute pups in the same litter. This type of dilution has no known link with any kind of health issue in most breeds, though dilute Dobermans frequently have skin problems (blue Doberman syndrome). 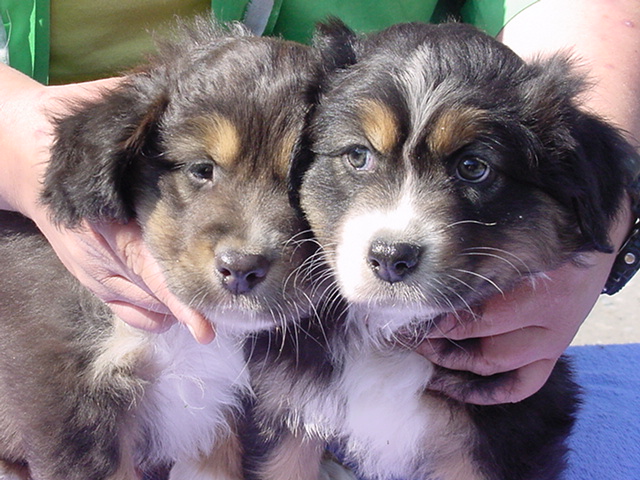 Here is cute pair of Aussie pups showing the difference between true black and dilute. The puppy on the right is a normal black tri. The eyes are changing color to dark amber or brown, and the nose leather is black. The puppy on the left is a dilute of black tri (could be correctly called a blue tricolor). The coat is an overall slate gray shade, and the nose leather is distinctly slate as well. The eyes are shaded by the eyelid, but it wouldn't be unusual if they were slightly lighter than those of the pup that is not a dilute. The tan points are as rich as those on the nondilute pup, since (dd) does not act on the tan points. 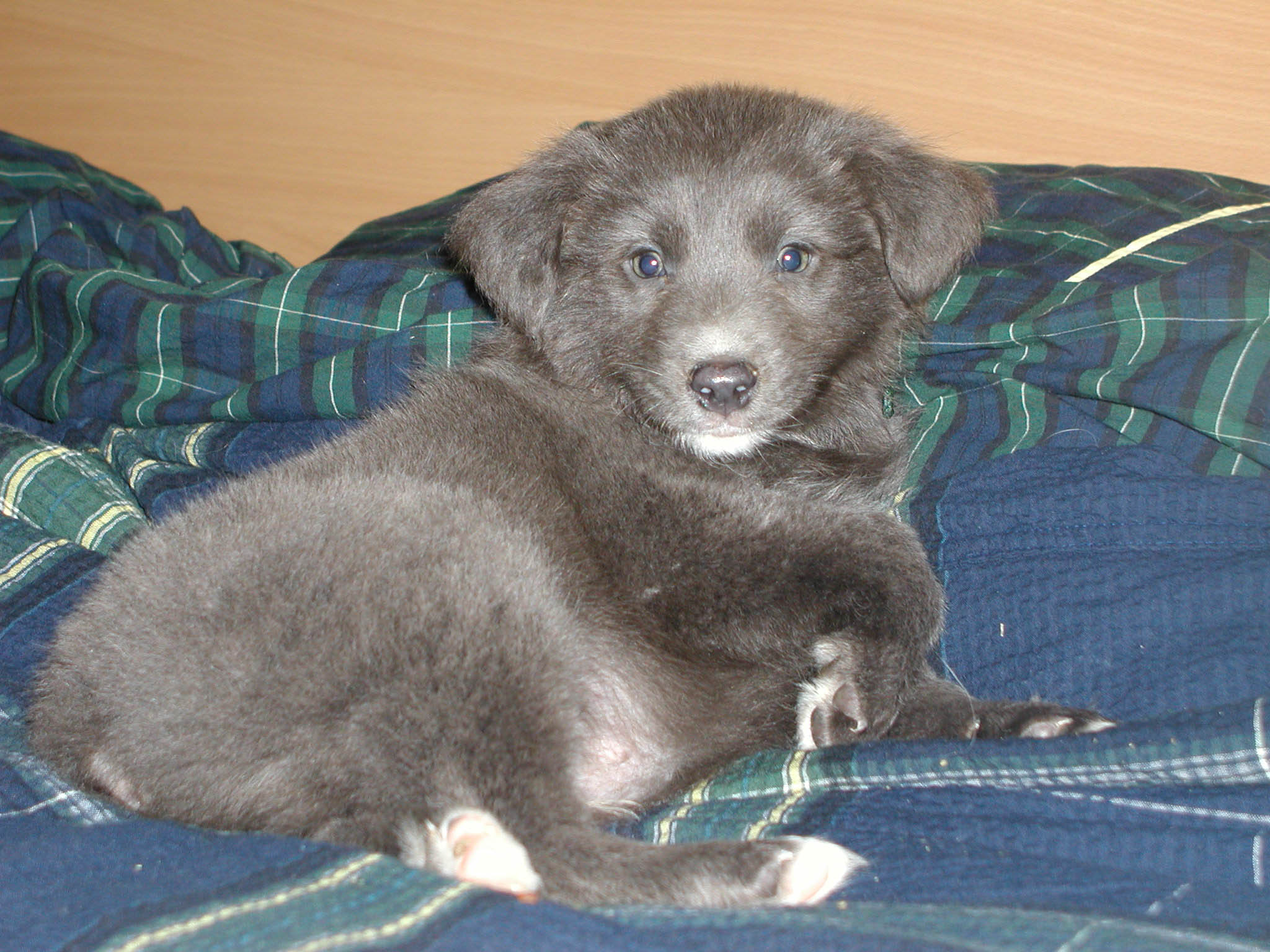 This is Rufous, a blue dilute puppy at about 8 weeks of age. If not for the dilution gene he would be a black bi, so the term here would be "blue bi". You'll notice that this puppy is a very clear steel blue, where some of the other blue dilutes on this page have more of a purplish cast. In some breeds, such as the German shepherd dog, blues that are red carriers (Bbdd) have a more lilac shade and those that are homozygous for black (BBdd) are a pure steel blue like this puppy (both red and dilute are DQ's in GSDs, but they do occur). This hasn't been proven in Australian shepherds, but in GSDs black does not completely mask red when dilution is present. I would hypothesize that this could be the case with the lilac tinted blue dilute Aussies, but genetic testing to verify what alleles are present would be required to prove this. Rufous' probable genotype is (BB dd). 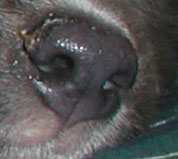 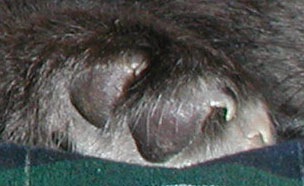 These are Rufous' nose leather and paw pads. Often dilutes have slate colored skin like he does, but this is not always the case. Some dilutes have nose leathers and paw pads so dark they are barely distinguishable from black. Dilution also affects the irises, and they are lighter than nondilute littermates have. But it does not affect tan points; if present, tan points are of the same intensity as they are in nondilute littermates. This is frequently seen in Doberman litters. 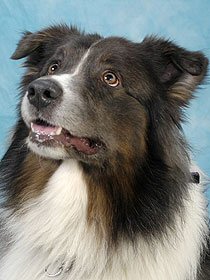 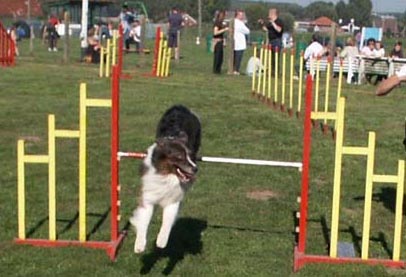 These are photos of Alaska Blue Van Nattrekja. He is a dark blue tricolor who competes in Agility in Belgium. Notice how dark his tan cheek markings are. Tan points are not faded by the dilution gene. His irises are a light gray-brown. Dilutes vary considerably in how dark or light they are. Alaska represents the dark end of the scale; in dim light he could be mistaken for a black tri. Alaska is another good example of a pure gunmetal blue without lilac highlights. His probable genotype is (BB dd). 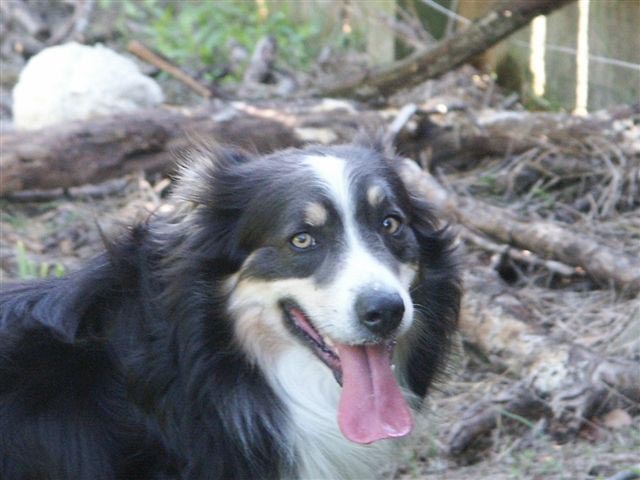 This is Steele, an Aussie rescued and photographed by Leona Stabler. He is also a blue dilute, but compare him to Alaska. He has distinct lilac or reddish sheen to his blue coat. His nose is fairly dark but is not true black. Overall his shade is dark like Alaska's rather than lighter like Rufous' coat. Steele's genetic background is unknown, but his probable genotype is (Bb dd). 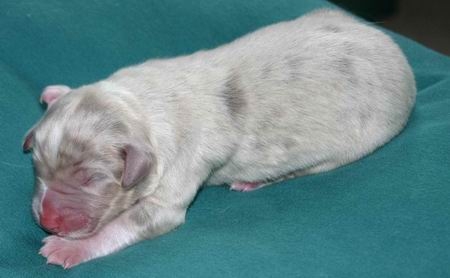 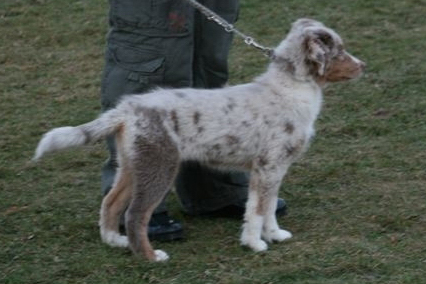 This is Mellie, a dilute blue merle (photo courtesy Susanne Heid of Germany). As a newborn she is very light in color with light gray merled areas. At 4 months Mellie's nose leather is a uniform slate grayish, and she has no black anywhere on her body. The darkest area she has is slate. Her probable genotype is (at-  B-  dd  kk Mm  si si). If she were a dilute red merle instead she'd be shades of light red and beige rather than light gray and dark gray. 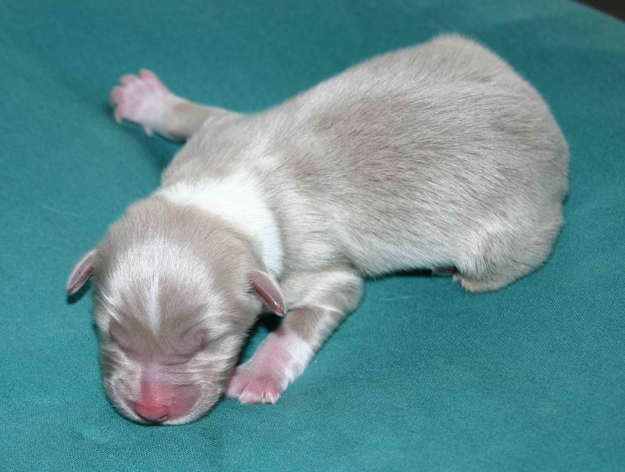 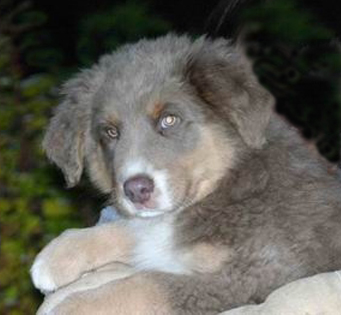 These two pups, photos courtesy of Susanne Heid, are littermates. Both are dilute reds. Mercedes on the left is pictured as a newborn, and Master of Wolves on the right is approximately 10 weeks. At birth both were a very light beige. By 8 weeks their color had darkened a bit, but their dilute status is still clearly visible. Their noses, eyerims,and paw pads are a light brown rather than the liver brown of a full intensity red. Comparing newborn photos, Mercedes and Master of Wolves are very similar in base body shade despite the fact that Mercedes is a dilute blue merle and Master of Wolves is a dilute red solid. Often identification becomes easier as the pups grow. 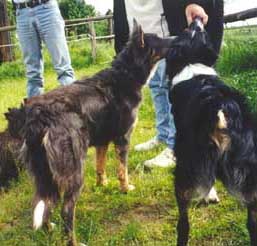 The dog on the left is "Cheyenne", a dilute blue tri Aussie from Germany (photo courtesy of Shelly Hollen). He would be called a "blue tricolor". A normal black tri stands on her right for comparison. Note that the action of the dilution gene has not faded her tan points. Cheyenne's probable genotype is (at at  Bb  dd  kk  mm  si si). 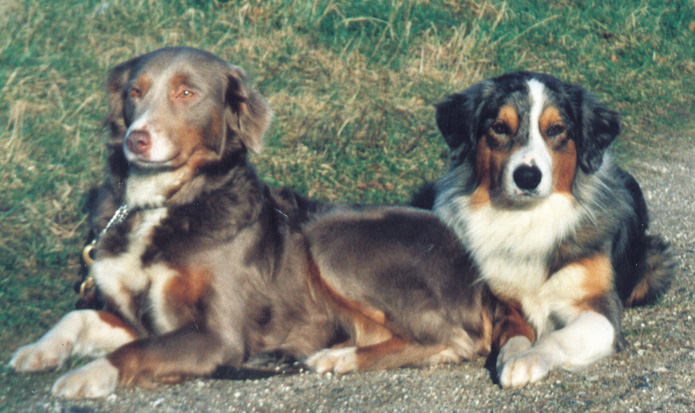 The female on the left, Phillips Beckey, is a dilute red tricolor residing in Sweden. A normal blue merle lies behind her. Beckey's tan points are quite dark, as they are unaffected by the dilution gene. Her liver coat is diluted to the color of a Weimaraner or "fawn" Dobe, though many red dilutes are much lighter in shade. Her nose and eye rims are a pale shade of liver, lighter than those of red tricolors. Her owner reports no skin problems such as those seen in "fawn" Dobes. Beckey's probable genotype is (atat bb dd kk mm sisi).