Sable is the second most dominant allele in the A series according to Little's model, and the most dominant according to models that put dominant black on the K locus. It is characterized by reddish hair shafts that are tipped in black (black nosed dogs) or tipped in liver (liver nosed dogs). It can also be black or red hairs interspersed among the reddish ones. In merles the hairs may be tipped in both black and blue (or red and light red). Sable does still occur in Aussies though it was once more common than it is now. It is a disqualified color in the breed standard but can be quite striking nonetheless. Probably it persists in the gene pool because it is not always recognized for what it is in sable merles and in red sables. The relative lack of color contrast in a red based sable can make it hard to detect compared to a black based sable. 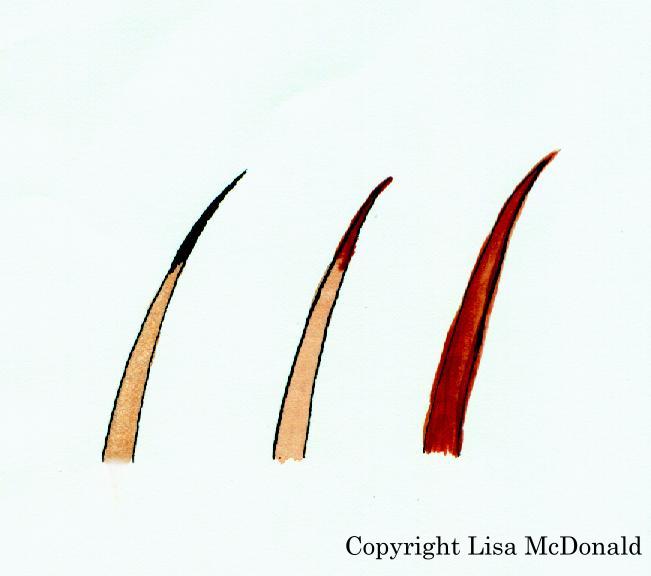 These drawings of individual guard hairs illustrate the distinction between sable and nonsable. The hair on the left is typical of a black nosed sable. The hair shaft is reddish and the tip is black. If the dog is a black nosed sable blue merle, there will also be some blue tipped hairs. The middle hair is typical of a guard hair belonging to a red nosed sable. Again, the shaft is reddish, and the tip is red. On red sable merles there will be both light and dark red tips. Since there is less visual contrast on a red tipped red hair than on a black tipped red hair, red sables are harder to detect at a glance. The hair on the right is that of a standard red dog with no sable. The hair shaft is the same color all the way to the dog's hide. A nonsable black dog's hair is also of uniform coloration clear to the hide.

This is a photo of the author's two dogs, Gunner and Braun. Gunner, on the left, is a normal blue merle puppy. Braun, on the right, is a blue sable merle. His hairs are reddish and tipped with black over the black areas, with blue on the blue areas. This effect gives him an overall muddy look compared to Gunner. Gunner's genotype is (atat Bb DD kk Mm sisi), while Braun's is 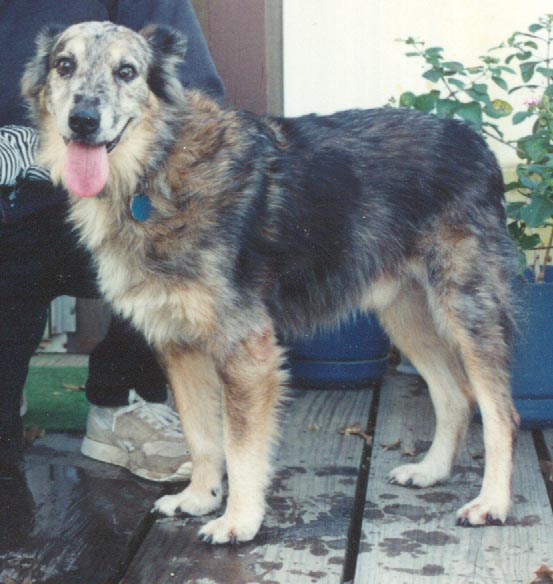 This closeup of Braun shows his merle pattern. The black tipping of the hairs is especially discernible on his ruff. Like a sable GSD, his legs and the spots over his eyes have an absence of tipping that causes these areas to resemble the tan point pattern. Sable is inherited as a simple dominant to the tan point pattern, and Braun got his sable pattern from his red sable merle mother. His dad was a normal blue merle like Gunner. If he had a copy of K, his sable would be totally suppressed and he'd be a self blue merle (except for anything happening at the S locus). 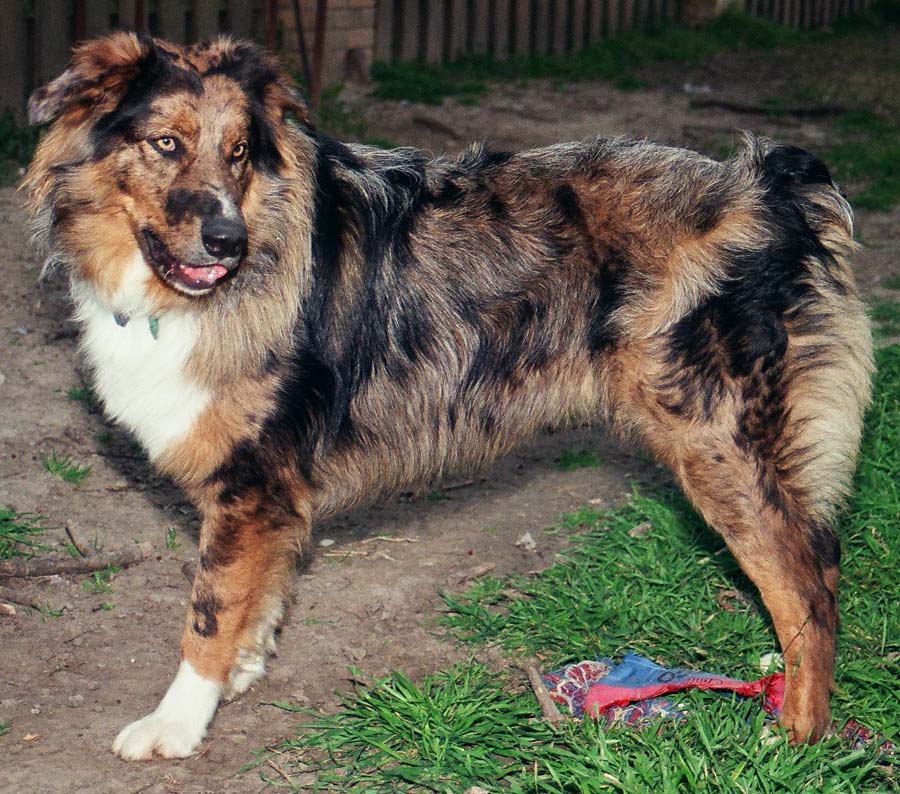 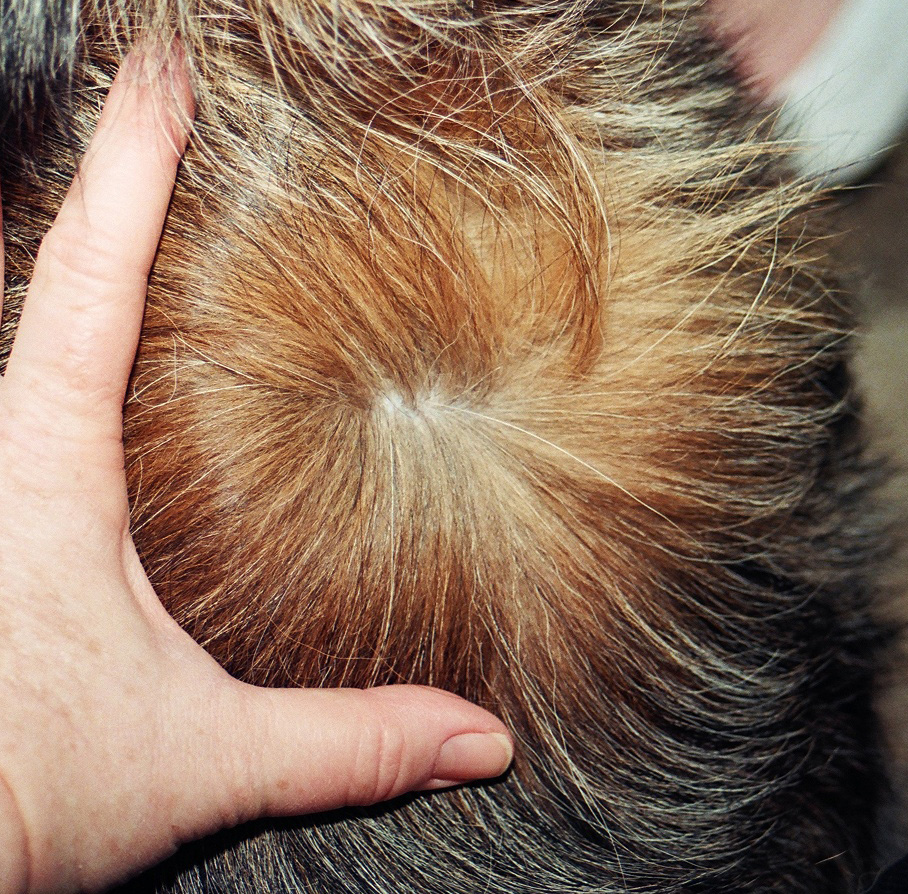 This striking guy is Monanee, a very large ASCA reg Aussie. He is a sable merle in which the black tipping is heavy enough that his merling is more visible than most. Most sable merles are not quite this distinct, and they frequently look like muddy blue merles. Monanee's eyes are lemon yellow and his reddish guard hairs are tipped with blue or black, depending on location. He is a trained assistance dog for a young man in a wheelchair. 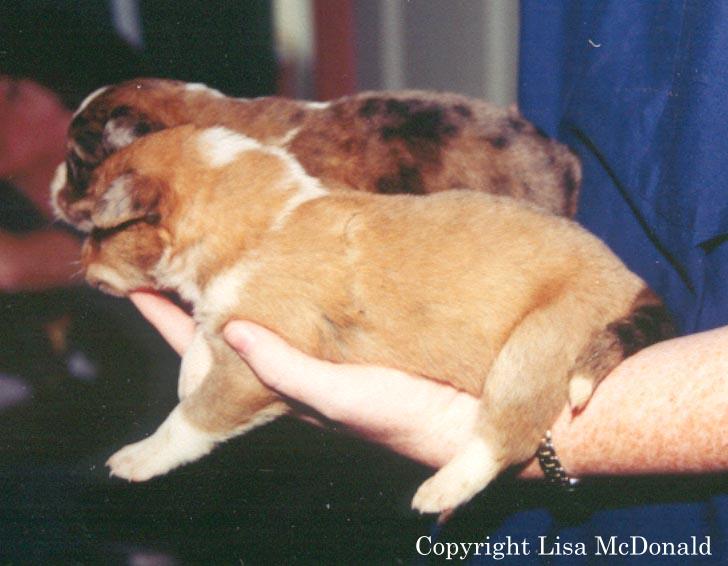 These puppies are sable blue merle littermates. The darker one probably has the genotype

(ayat B- DD E- kk Mm sisi) while the lighter one is probably homozygous for sable (ayay B- DD E- kk Mm sisi). In several related breeds in which sable is the norm, homozygous sables (ayay) are a light honeylike shade and those who are sable but carry the tan point pattern recessively (ayat)are much darker. Notice the blue tips on the hairs of the ear leather on the lighter puppy. The merle pattern is much easier to see in the darker puppy. Light sables are sometimes confused with E locus yellows. To distinguish them, check for tipping on the hairs. A yellow will not have any black or liver hairs or hair tips. 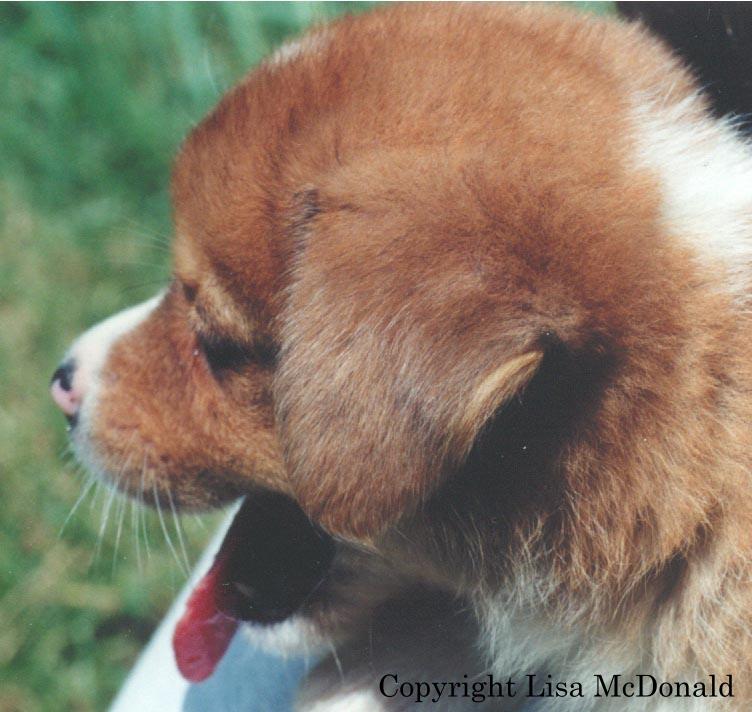 This is a closeup of the head of the lighter of the two sable merle pups at 7 weeks. Notice her ear leather has distinct blue tipping and black tipping on the hairs. Black tipping is evident elsewhere on her coat, but the blue is especially good for viewing on that ear leather. E locus yellows may have a similar overall color, but the tipping of the hairs will not be present. 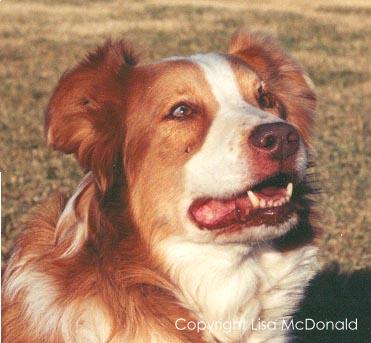 This is Scooter, two time world Frisbee champ belonging to Lou McCammon. Scooter is a red sable merle. His hairs have red shafts and liver tips, but the contrast is easily seen only on the face. It was difficult to visually discern the tipping on the body hairs, even on close hands-on examination. There just isn't as much color contrast between a reddish hair shaft and a red tip as there is on a reddish hair shaft with a black tip. The merling was visible only on his outer ear leathers. His probable genotype is (ayat bb DD E- kk Mm sisi). If he were (ayay) he would probably be difficult to visually distinguish from a yellow (ee). 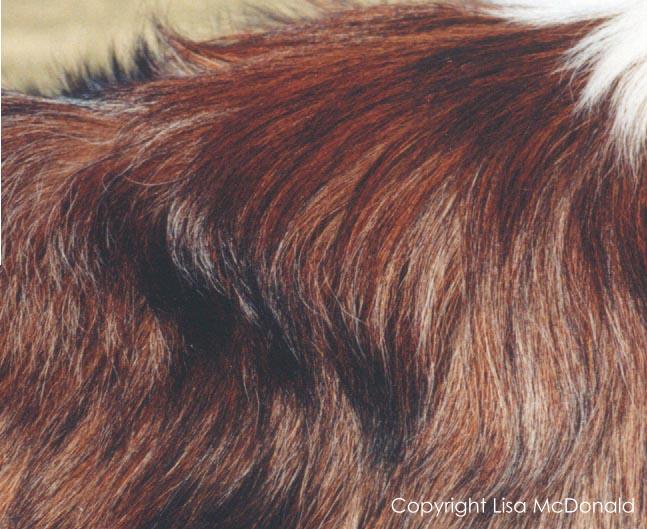 This is a closeup of Scooter's son Regal. Regal is a black nosed sable homozygous blue merle, and the black and blue tipping on the reddish hairs shows much greater contrast on his body than the red on red does on Scooter. Regal has some very rich red areas on his coat, but he is a sable blue merle like Braun, not a red. His genotype is (ayat Bb DD E- kk Mm sisi). 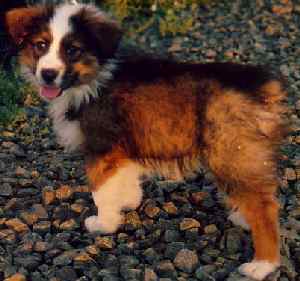 This is a photo of a sable Aussie pup, courtesy of Kristin McNamara. Here, without merling to distract the eye, the sable is easy to recognize. The individual hairs are reddish with black tipping, and black hairs are interspersed heavily through the coat. In a red sable the color contrast is much less and the dog would easily mistaken for a normal red. If he were a sable blue merle he would look like a muddy blue merle. That is probably why sable remains in the gene pool. It is not associated with any health defect, and it is the norm in many of the herding breeds. The difficulty lies in identifying the sable merles for breeding purposes. He is a very dark sable with lots of black hairs; it is likely that he is heterozygous for the sable gene. His probable genotype is (ayat B- DD E- kk mm sisi). 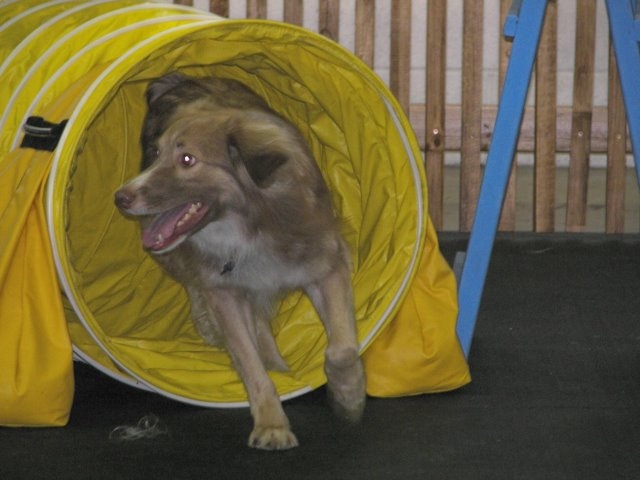 This is Lotto, photo courtesy of Marla Lunt. He has several interesting patterns of pigment going on! He is a red sable with the E^M mask. Because his base color is red, his mask is also red. The sable is most noticeable on his face and head; there is much less color contrast between the hair shafts and the tips of the hairs than in a black based sable. His probable genotype is (ayat bb DD EM- kk mm sisi).