Yellow is probably the second most common nonstandard color in the Aussie breed. Inherited as a recessive at the E locus, it restricts the dog's body pigment and will obscure the tan point pattern if present. It often obscures merling in the heterozygous merle, though not always. The dog's true body color can be determined from the color of the nose. Dogs that are genetically black will have black noses, and dogs that are genetically red will have liver noses. Yellow varies tremendously in shade from the very light yellow of some Labradors, through the golden shade of Golden Retrievers, to the rich mahogany red of the Irish Setter. Most yellow Aussies approximate a palomino horse in color, though shades vary by the individual. This color is often mistaken for sable. The determining factor is the distribution of pigment on the guard hair. On a sable, the guard hair is light reddish with a dark tip (black or liver or blue) or guard hairs of these colors will be interspersed among the yellow hairs. On a yellow, the entire hair shaft is the same color, and there are no black hairs present.

Probably the yellows persist in the gene pool because liver nosed yellows can strongly resemble lighter reds and are mistaken for them. Yellows can result from the mating of two Aussies of any colors who carry "e" recessively - solids, bis, tris, merles. Yellow x yellow produces yellow. One early sire known to have introduced the color yellow to the breed was "Dugan's Yellow". It is very likely that other early Aussies were carriers. That "e" allele can be passed as a recessive for many generations, and all of a sudden one or more yellow puppies can appear in a litter when two carriers get together. There is no health issue associated with yellow. They are as sound as any other color. 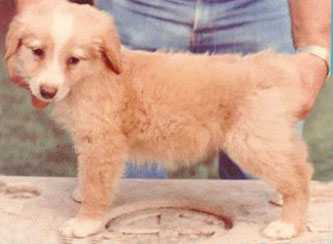 This is a yellow Aussie puppy with some expression of the Irish spotting pattern. His individual hairs are uniform yellow, and he's about the shade of a Golden retriever. His nose is black, a definite flag that he is not a red. If his nose had been liver, it might have been a tougher call to determine whether he was a yellow or a very light red. His eyes are very dark black/brown; typically a red this light would have lighter eyes than this puppy. You can't tell by looking whether he has inherited the tan point pattern, since tan points do not appear on yellows even if the gene is present. It is also not clear whether he is a merle, since yellows with only one copy of the merle gene often do not show merling. His probable genotype is (B- ee). 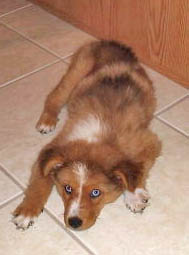 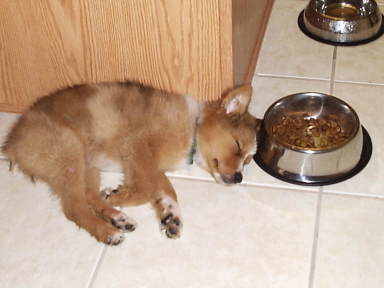 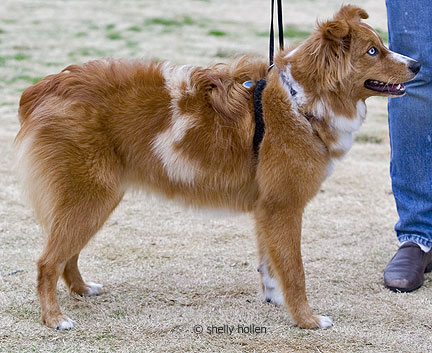 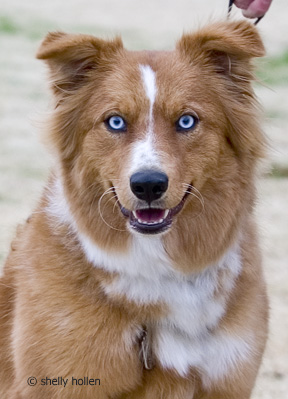 This series of photos, courtesy of Shelly Hollen, shows a yellow merle from approx 4 months old to adulthood. According to his breeder there was no distinct merling until he was about 4 months old; it became more distinct gradually. At 4 months he resembled a sable merle, though no sable is present on him in adulthood, even with a hands on exam in bright sunlight. Here is a case where merling is visible on a yellow. His proposed genotype is (ay-  B-  ee  Mm). As an adult he has clearly distinct merling in a much lighter shade of yellow. It is possible that the interaction of sable and yellow is responsible for the merling being visible, but no research has been done on this question. It is also possible that a yellow with no puppy sabling would also show merling. Border collie breeders might have some insight on this, since both sables and yellows are allowable in Border collies. 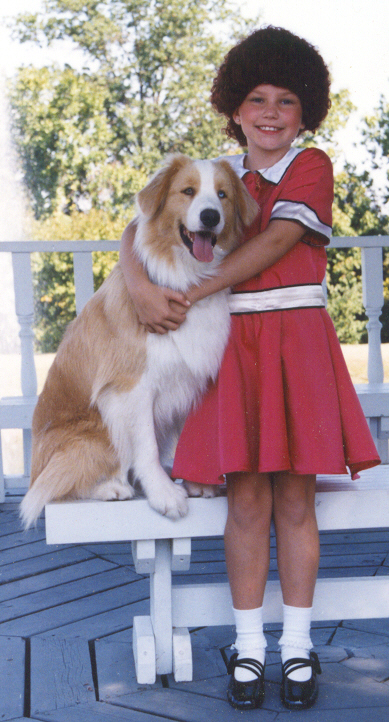 This handsome fellow is Oaffie, photo courtesy of Lynn Nathe (Wrencrest Australian Shepherds). He starred as Orphan Annie's dog Sandy in the school play "Annie". He was one of three yellows in a litter of blue merles and black tris shown below. He is a merle, though only his marbled eye reveals this. A single copy of the merle gene sometimes doesn't show in the coats of yellows, and it is not visible in Oaffie. He probably has the gene for the tan point pattern, but it also doesn't show in yellows. His probable genotype is ( B-  ee  Mm). He also could be mistaken for a light red if not for that jet black nose and eye rims.

Here is a litter of pups sired by "Buster", the non yellow sire of Oaffie. Oaffie is the yellow pup on the left of the 3 yellows. This litter contains quite a variety of colors. There is a black bi, a black tri, a blue merle with tan points, and 3 yellows. The yellow pup on the left has blue eyes, showing strong evidence that he is also a merle. However, merle is often not distinguishable on yellows when only one copy of the merle gene is present. Interestingly, the tan point pattern also does not show up on yellows, even if present genetically. So these yellow pups, if crossed to tricolors, could produce normal blue merles with tan points. This is why it is so important to know the genetics of a potential breeding dog. Things are not always as they appear (see section on cryptics).

This is Nugget, a liver nosed yellow. Notice that his coat is the same color as Oaffie's, and that he has the same paler stripe behind the shoulder. But his nose and eye rims are liver. This dog could easily be mistaken for light red. True reds tend to be more uniform in coloration, where yellows often show the pale shoulder stripe and some darker yellow color shadings on the ears and tail tip. Nugget's probable genotype is (bb ee mm). He could be Mm, but we don't see any merling on him, so we can't be sure without the DNA test for merling. 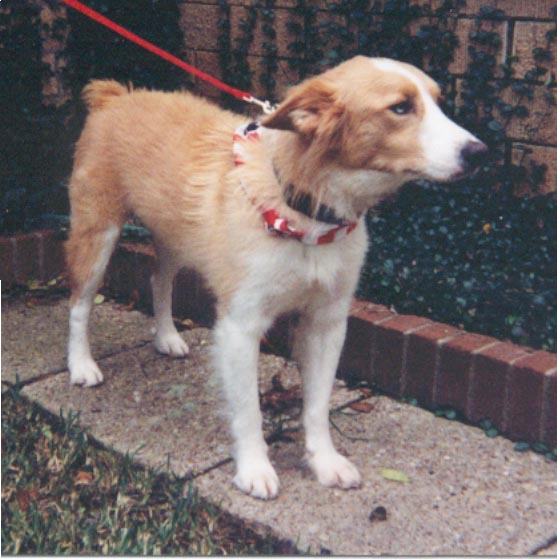 This is "Mr. George", a rescue. In this pic he is quite underweight and out of coat. His new dad tells us he has gained 25 pounds and has grown a gorgeous show-like coat in the 6 months or so since he was adopted. He also happens to be a merle, but the merling does not show on his yellow coat. In heterozygous merles the merling may nor may not be visible on a yellow dog. In a homozygous merle there would be excessive white on the yellow dog just as in any other color. Unlike a sable dog's hairs, his hair shafts are the same shade of yellow from hide to tip. His nose is black, so we know his genotype is (B? ee Mm). If his nose had been liver, he might have passed for a very light sorrel red, particularly if his coat darkened a bit when it grew out. 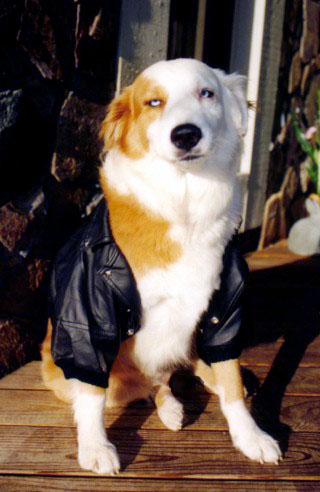 This is Mack, a yellow Aussie who also has a half white head (photo courtesy Tina Valant-Siebelts). He is wearing his Harley jacket and enjoying the attention. Note that his eyes are blue. Probably he is a merle, but again we cannot be sure without a DNA test since there is none visible on him. He is an excellent example of a black nose against a yellow background. This eliminates the possibility of him being a light shade of red!