There was a time in our breed history when brindles cropped up more frequently than they do now. Brindle is not a recognized color in the Aussie breed standard. It crops up with low frequency in ranch and working Aussies who have brindled tan points, and I now have an example of one. If anyone else has a photo of an Aussie known to be purebred with either all over brindling or with brindle in the tan points, I'd be happy to add it here as an example. Brindle was once thought to be located on the E locus, but geneticists now say this allele is located on the K locus. Visually it is a tiger striping pattern such as one sees in Boxers, Whippets, and others. In dogs that have a black gene B the background is yellowish with black stripes. In red dogs bb the background is yellowish with liver stripes. Brindles can also be dilute. In Catahoulas merle can combine with brindle to make a very wild pattern. This would theoretically be possible in an Aussie who was a brindle merle.

To illustrate clearly what brindle looks like, there are two dogs below of different breeds. 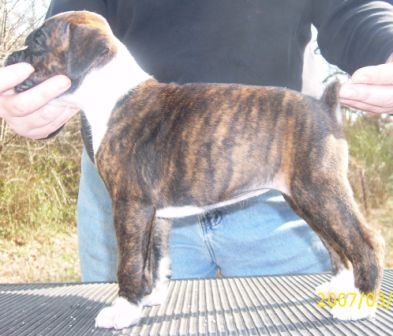 This is a 5 week old Boxer puppy, photo courtesy of Pam Stephenson. With his short slick coat he illustrates the brindle pattern clearly. It is a vertical tiger striping pattern with chevrons on the spine. It is not indistinct splotches or smudges of color. A brindle Aussie would look very much like this as a newborn when the coat is still very short. His probable genotype is

This is Snickers, a half Aussie brought into rescue. This is what whole body brindle looks like on a dog with an Aussie type coat. It is a definite tiger striping, though less visually distinct due to the long guard hairs. In dogs with the tan point pattern, brindle appears only in the tan points if Kbr is present. Snickers' probable genotype is ...(A-  B-  kbrk mm S-). If he were (at -) his brindling would be restricted to the area of tan points and the rest of his body would be black. 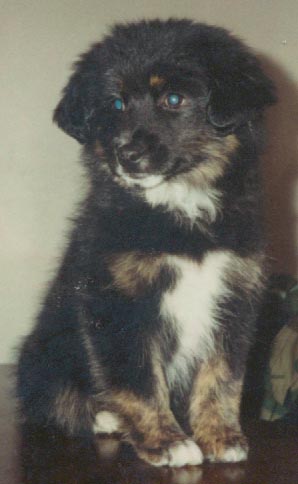 This is an Aussie puppy who is a black tri with brindling in the tan points. These are not random smudges of black like we see in dogs with smutty tan points. These are distinct stripes of black most visible on her legs, shoulder patches, and neck. Since the brindle is restricted to her tan points, her probable genotype is (at at   B-  kbr-   mm  si si). The coverage and placement of brindle is dictated by what is at the A locus. The (at) restricts the brindling to her tan points. A whole body brindle would be (A- kbr-) at these loci. 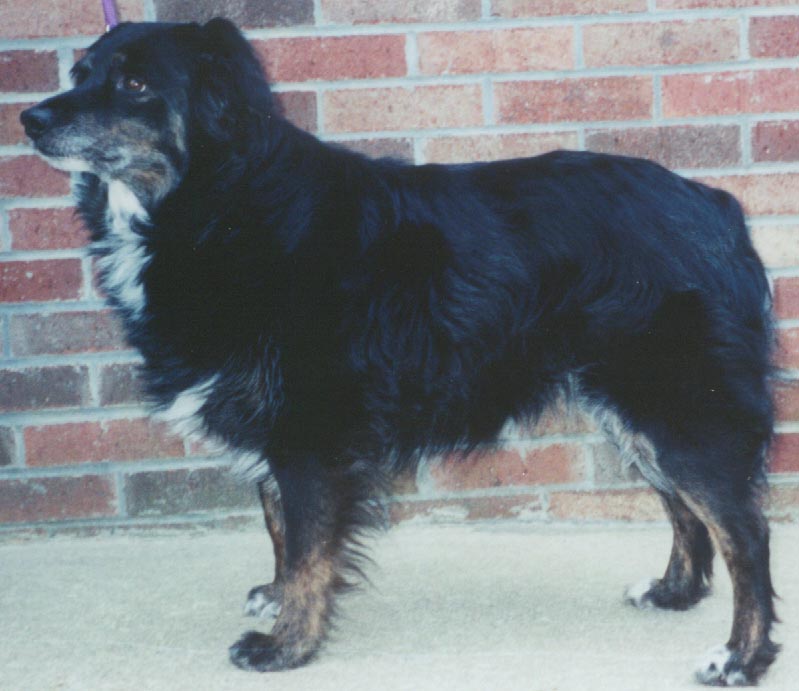 Here is a photo of the same girl several years later. The brindle pattern is limited to the area of her tan points. The brindling forms vertical black stripes on her legs and it is horizontal on the sides of her face. She also shows some ticking on her toes and throat. This is a registered Aussie from working lines with known parentage. Brindle does occur in low frequency.