MORE THAN ONE BASE COLOR

Sometimes when an embryo is developing one of its skin cells undergoes a mutation. Any cell that is produced by this mutant cell dividing also contains the mutation. Cells originating from other layers of the gastrula, including sex cells, do not originate from the same layer as the skin cells and are not affected by a skin cell mutation. For this reason a dog which has a somatic mutation will not produce its dual color in offspring. CA Sharp has some excellent slide photos of Aussies with somatic mutations. She uses these in her genetics seminars. The photos below are of a registered Golden retriever who underwent a somatic mutation while still an embryo. This phenomenon has also been observed in domestic cats and in ranched foxes.The photos of Seth were supplied by Elaine Reynolds.

This is a registered Golden retriever named Seth. Goldens are genetically black but look golden yellow to reddish due to their (ee) genes restricting the development of black pigment. They're of the same genetic makeup as the Aussies on the "yellow Aussies" page. Goldens are (BB ee) in constitution. This Golden had mutation in a skin cell in which (ee) became (Ee). This allowed the black pigment to form in cells descended from that one original mutant cell. He does not produce puppies with black spots because the mutation occurred only in his skin, not his reproductive organs. If his testes were also completely or partially composed from cells from the original mutation, then he could sire black pups when mated to normal Golden females. 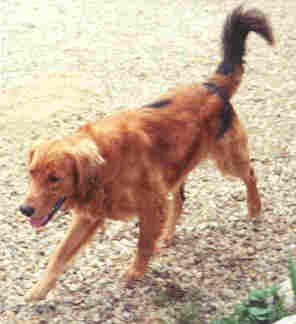 Here is another view of Seth. His body is reddish yellow in color and his nose is black, just like a black nosed yellow Aussie. Where (ee) has been changed to (Ee) he shows black pigment. CA Sharp has a photo of an Aussie in her slide show on whom the reverse mutation has taken place. This normal black tri Aussie (B- EE) or (B- Ee) has a yellow patch on his hip that is (B- ee) like this Golden. He also didn't throw this trait to offspring, since the mutation took place in a skin cell, not a gonadal cell. 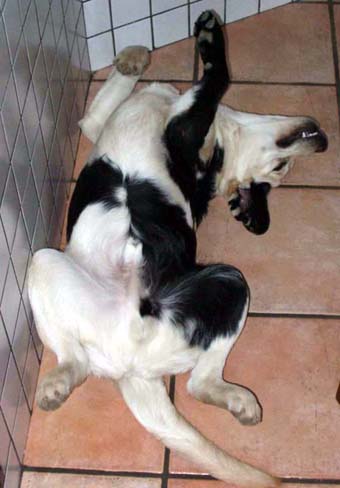 This is a photo of Spotty, a registered Labrador retriever courtesy of the Matessers, owners of a kennel in Italy. Spotty's mom is a black Labrador, and his dad is a yellow Lab. His siblings are all either yellow or black. DNA testing was done to verify parentage. But during Spotty's embryonic development a skin cell mutated from ee (yellow) to Ee (black). All the descendants of that mutated cell produce black pigmentation. Could he sire black puppies in addition to yellows if mated to a yellow? Possibly. His left testicle is black; if the cells inside it are of the same origin as the black cells on the scrotum, they would produce sperm containing E as well as e. 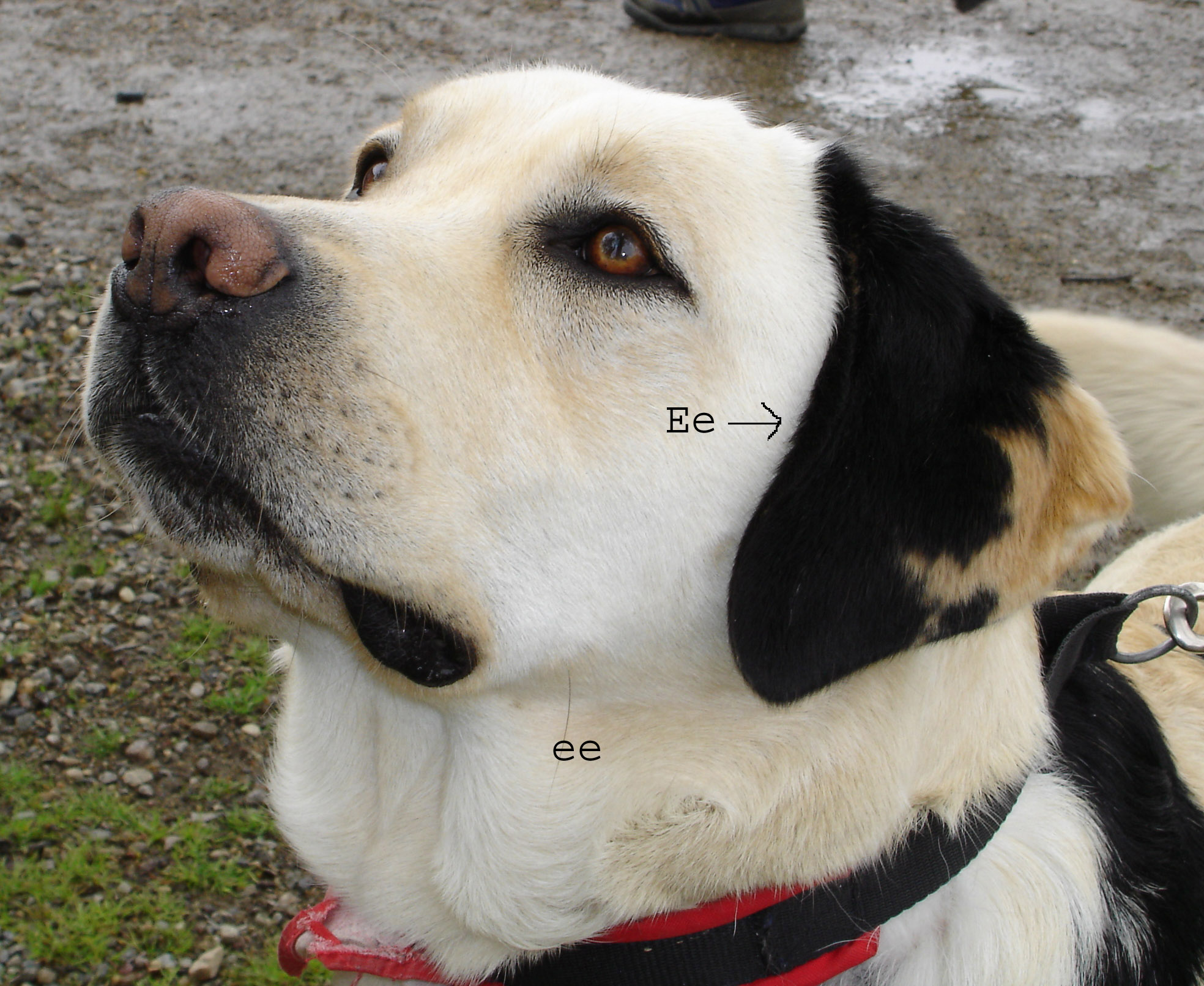 Here is a closeup of Spotty's face as an adult. He is clearly a mosaic of yellow and black rather than a black pinto with the white spotting gene. He is actively shown in canine sports, where his dual color catches a lot of attention. It is equally possible for a dog to be a chocolate/yellow mosaic or a chocolate/black mosaic. Another possibility is that two embryos merged very early in development, producing a Chimera. But DNA tests reveal only one dog present.