For reasons we don't always understand, some individuals will go through some remarkable color changes even after reaching adulthood (See link for puppy color changes). It is fairly common, though not universal, for merles to darken with age. A puppy that starts out powder blue can be a deep pewter by 7 or 8 years of age. By the age of 10 some individuals resemble black tris in dim light because the blue has darkened so much. This type of color change is common. But we also have chameleons in the breed that change color in very uncommon ways.

Below is a sequence of atypical color changes in an adult Aussie named Cosmo. Cosmo started out as a typically marked blue merle pup out of a blue merle x black tricolor breeding. By age 3 1/2 his blaze was getting bigger (in most dogs blazes get smaller with maturity). When he moulted at age 4, his new coat was a startling white! There was no dietary change, no illness, and no loss of vitality. He had not been subjected to unusual stress or grief of loss. Even the pigment pattern on his skin changed, though the texture of his coat remained normal. Dermatologist/immunologist Dr. Kennis, on staff at the Texas A&M vet school, diagnosed it as vitiligo, a loss of pigment which also occurs in humans. Cosmo's change started at age 3 1/2. Cosmo did eventually regain a small amount of his pigment. Notice the faint gray patch on his hip. But within a year or so he went back to all white, except for his eyerims, nose, and lips. It will be interesting to see whether he remains white or regains some pigment a second time. 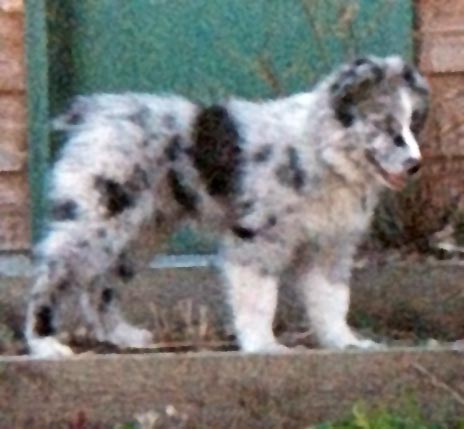 This is Cosmo at 3 months of age. He is a normal blue merle in every way. His white markings are quite modest and his blaze does not exceed normal limits. He does have some pink on his nose, approx 20% coverage. 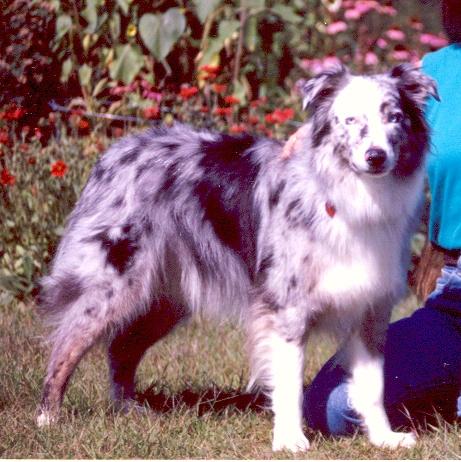 At age 3 1/2 years, Cosmo is still a normal looking merle. His blue is somewhat darker than at age 3 mo. His tan points are also clearer to see now that he has an adult coat. But his blaze has increased in coverage! Instead of being a thin white strip, it now covers one half of his forehead. Blazes usually get smaller as the pup grows, not bigger! 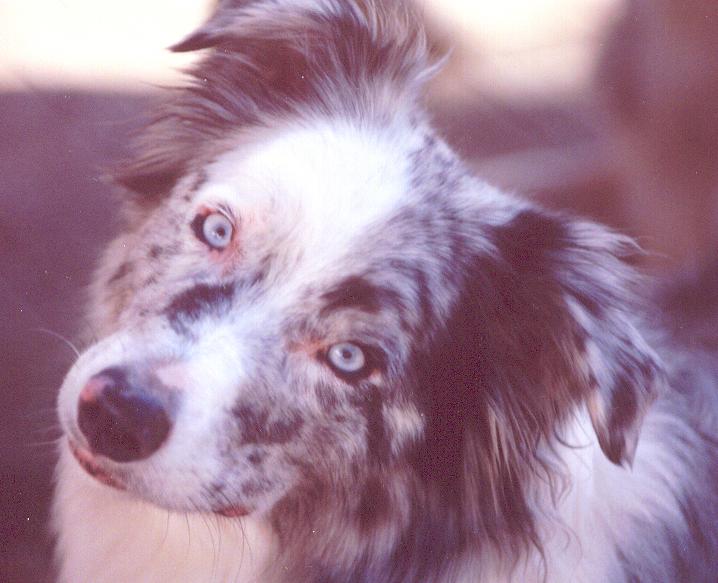 This is a closeup of Cosmo's face at age 3 1/2 years. His pink nose spot is about 10% of the total nose area, but his blaze has definitely increased in coverage. He also has a white muzzle, something he did not have as a pup. 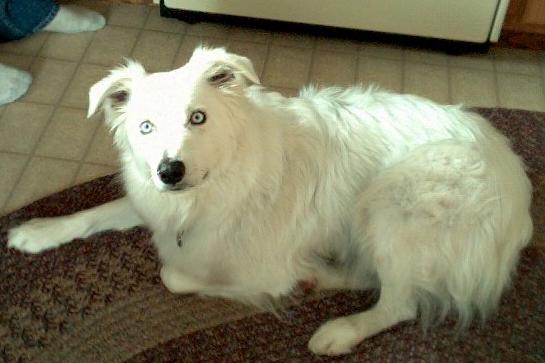 This is Cosmo at age 4. He had an unusually heavy moult, and his new coat grew in almost completely white. Faint merling can still be discerned on his hip, but even the patterns on his hide have changed somewhat. He does retain the rich black pigment on his eyerims and nose, and his hearing and eyesight remain normal. He eats with gusto, loves to run, and shows the vitality of a healthy Aussie. The vet gave him a clean bill of health. The reasons for his vitiligo are unclear. 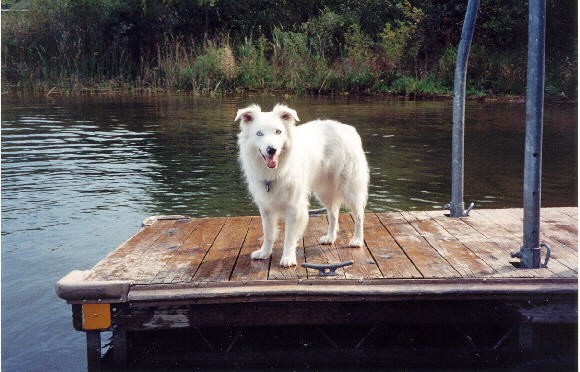 Here is Cosmo at approx 5 1/2 years. He has regained a very small amount of pigment - note the faint gray area on his hip. However, with the following moult this reverted back to white and he is white currently. Vitiligo is known primarily to occur in Aussies and Rotties, though it is not common in either. There may be a genetic component but this is not totally clear.

Nikki is a female who has also experienced a dramatic color change. She is not known to be related to Cosmo. She was born a normal looking blue merle and remained so for her first couple of years. Over the course of just a few months her coat changed texture to that similar to a rough collie - longer and somewhat feathery. Her nose and the areas around her ears started losing pigment. In some areas she lost hair as well and developed bald spots. The vet initially thought it was just allergies, and she didn't think it was vitiligo based on the symptoms. Her initial concern was the possibility that Nikki might have VKH Syndrome, because that is accompanied by vision loss as well as pigment loss. Aggressive treatment would be required to save her sight in that case. A complete skin biopsy and blood workup indicated she did not have VKH. The conclusion was that allergies played a role, as did her hypothyroidism. The diagnosis was ideopathic vitiligo. She may or may not repigment later. 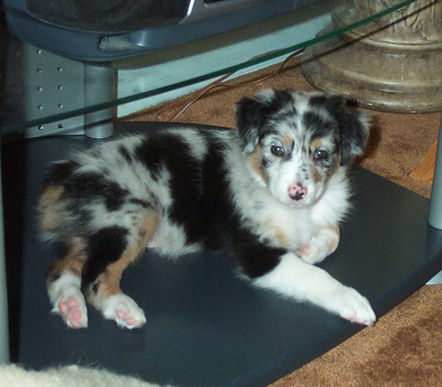 This is Nikki at 8 weeks. She is a normal blue merle puppy with no more than the usual amount of white. Her nose is butterfly at this point but her eyerims are black. Photos of Nikki are courtesy of Shelley Hoelz. 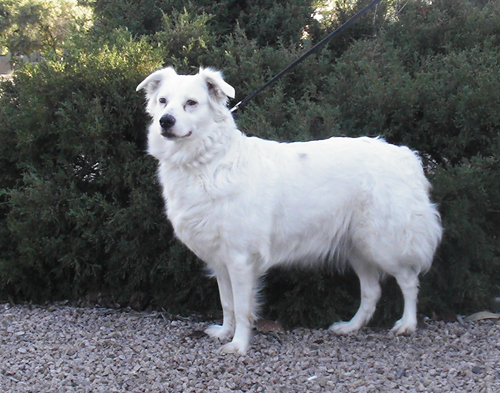 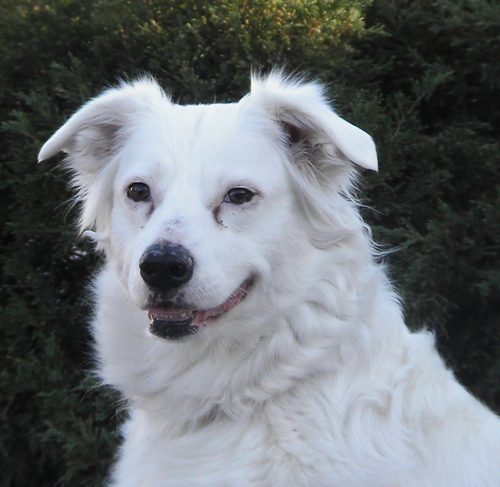 This is Nikki after her loss of pigment. By now her nose leather has darkened to black, but her eyerims have no pigment. Her eye color is deep brown; they were not affected by the vitiligo. Her coat has grown back and there are no longer any bald spots. She has remained white for several years; she is almost 7 years old now. According to the vet report she may or may not regain some or all of her pigment. This is a big unknown.