For reasons we don't yet understand, some individuals will go through some remarkable color changes prior to reaching their adult coloration. Color change is rarer in adults. Several distinct types of color change are known to occur in the breed. The particular type of color change we see in Flame is uncommon, but it does occur enough in the breed to note its presence. Changing color can make color identification in the puppy for registration purposes a challenge. This series of photos was taken of the puppy Fowler's Flaming Star "Flame", courtesy of Donna Fowler. He was the only atypical puppy in the litter. 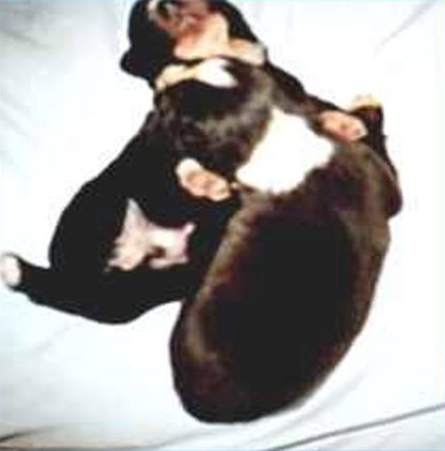 This is Flame (right) and a normally colored black tri sibling (left) at 2 weeks of age. Flame has a black nose, but his coat has a distinctly reddish brown cast. 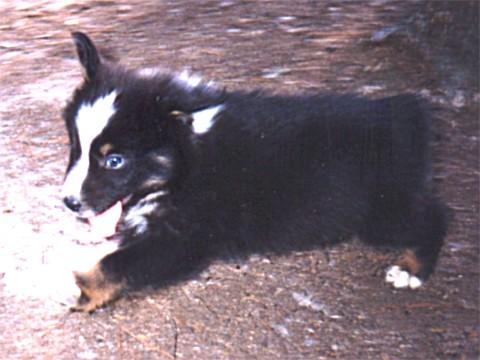 At 6 weeks, Flame looks like an ordinary black tricolor with just the barest hint of the change to come. His coat is a typical black without any brown cast to it. Already his tan points are a deep copper. 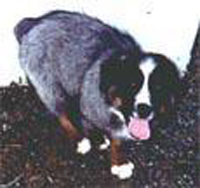 This little thumbnail was taken looking down at Flame at 3 months. He now looks like a silver fox! He has developed a strong silvery blue cast to his body and upper legs. Only his face, tops of feet, and ears remain true black. 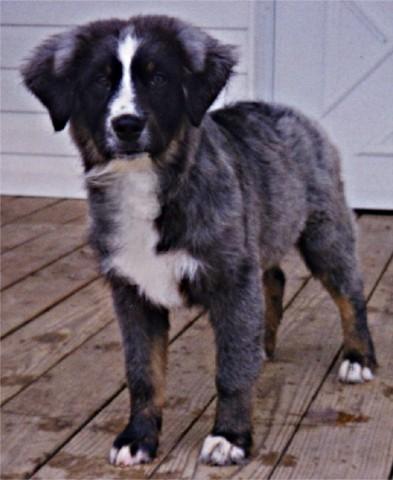 Here he is at 4 months. Flame's bluish cast is less contrasty, but it's definitely still there. His face, tops of his feet, and ear tips are still black, but the rest of his black is a frosty bluish color. 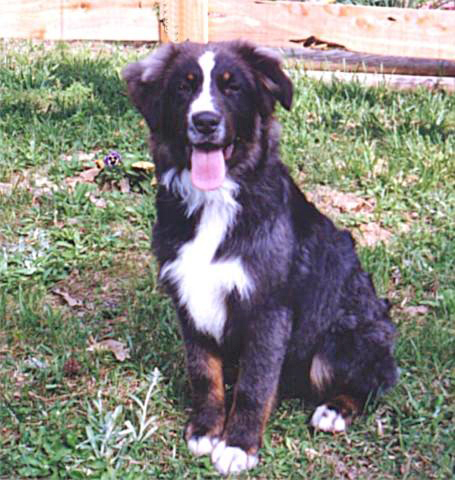 At 5 months, Flame's bluish areas are beginning to fade. They look more like highlights now. So what exactly is he? The answer is below. 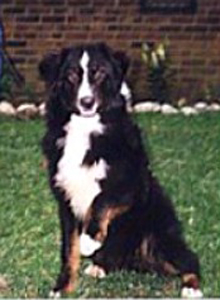 This is Flame at 1 year. He's a handsome black tricolor with no trace of the blue he had earlier. He is reported to have a slightly reddish cast to the black when viewed in the sunlight. The earlier silvery bluish color was just an interesting phase in a series of transition puppy coats. This color change from black to blue to black again is documented in Rough collies. Page 107 of "The Collie: A Veterinary Reference For The Professional Breeder" shows a young collie going through the same type of color change that Flame did. In collies this gene is called "powder puff" and it is inherited as a simple dominant. The progressive greying due to the powder puff gene is distinguished from a dilute in that the head stays dark and the full black (or red on a red dog) on the body returns by adulthood. Dilutes (dd) are uniformly diluted and remain so all their lives. Many thanks to Donna for sharing this photo series of color changes!

Sometimes true dilutes (dd) are light at birth but darken as they develop to the point that they no longer look like dilutes. Probably there is some currently unknown modifying gene that causes this. 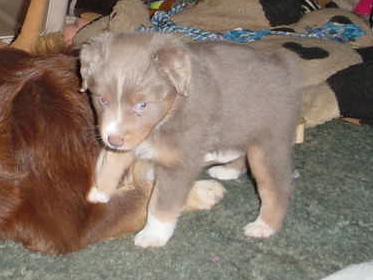 This is Red as a young puppy with her normally colored red mom beside her. At this age she is clearly identifiable as a dilute red, as her color is a uniform beige. Her nose leather is very light, but it is pigmented. 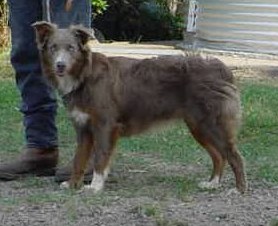 This is Red near adulthood. She has darkened considerably and could easily be mistaken for a regular red. Her nose is as dark as a regular red, yet she is still a dilute. It is unknown how common it is in the breed for dilutes to look like nondilutes and be possibly misidentified when registered as older pups and young adults.