A GALLERY OF SPLIT FACES

The split face is a variation of pigment distribution seen in merles and sometimes in solids with blazes. In most merles the distribution of merled areas vs dark areas is random. Merle dogs are not typically symmetrical in their body markings; the same dog may be mostly dark on one side and heavily merled on the other. In a split face the color splits down the midline of the skull with white on one side/color on the other, or merle on one side/non merle on the other. The mode of inheritance is unknown. It may simply be an aspect of fetal development rather than a pattern controlled by genetic inheritance. No known breeding tests have been performed to date to determine the heritability or lack of heritability of this trait. 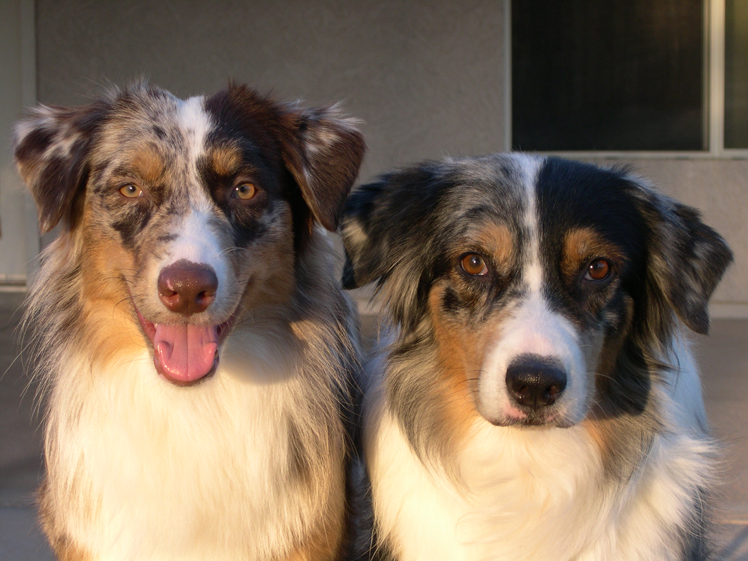 Here is a mother - daughter pair of split faced Aussies, photo courtesy Claire Gustafson. Capricorn's Pajama Party "Jammie" is on the left, and her mom Capricorn's Blue Storm Brewing "Zoe" is on the right. Even though Jammie is a red merle and Zoe is a blue merle, their splits are remarkably similar- full pigment on their left sides, merling on their right sides. It is not known if the tendency to split pigment down the midline is heritable or not, but this pair suggests it is possible. 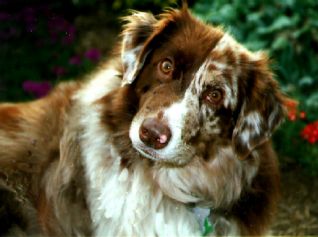 "Moe" is a lovely red merle belonging to Dave and Audrey King. Moe shows a midline split from the cranium to the nose. There is a little bit of a blaze right above the nose and slightly to her left, obscuring the split in that location. 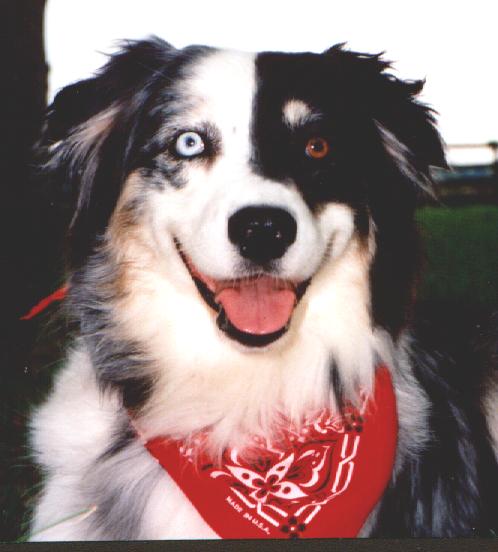 This is Melanie Magamoll's "Spur". Spur is a blue merle with tan points, but here it is the white and the black that have formed the midline split. Since white covers up what pigment is there, much as white paint covers the color underneath it, we don't know if the white part of the split would be merle if the white hadn't been there. Spur has an interesting feature in that the white spreads across the nose in a symmetrical blaze, so the midline split only comes slightly past the stop. The effect is dramatic and makes her a very striking girl. Photo courtesy Melanie Magamoll.

This is "Marge", a blue merle and white, belonging to Suzanne Olsen. She shows a beautiful split down the midline of black and blue merle from the top of her head to her nose. White markings would obscure this. 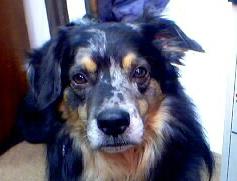 This is Jake, courtesy of "A.J.". Jake has a very striking and unusual double split face. His pattern is split down the midline of his head like all the other split faces, but he also has a split on the horizontal axis between his eyes. On the forehead he's merle on the left, black on the right. At his eye level this reverses to merle on the right, black on the left. This double reversal is really unusual and very pretty to look at! 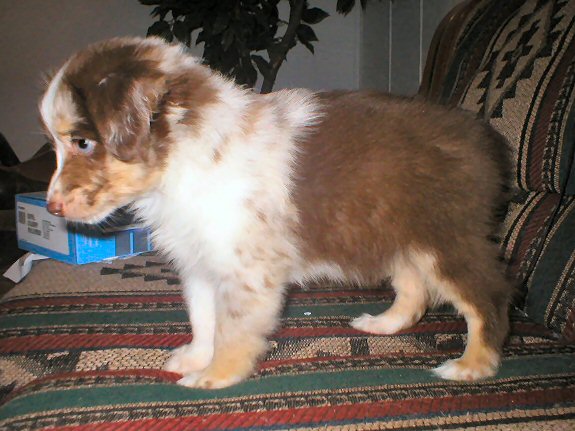 Merling sometimes divides in other unusual ways. Chocolate Chip, a red merle, was bred by Lindsey Porter. This puppy has her merled and nonmerled areas sharply split. The front half of the body is merled, and the rear half is solid or mostly solid. Merling is usually asymmetrical and can be completely different from one side of the body to the other. She does not show the same overall rear/front split on the opposite side of the body. The fact that she has a very close relative who is a blue merle and marked in the same way suggests that there might be some degree of heritability of this unique pattern. It will be interesting to see if this bloodline produces more pups marked this way.