Most Aussies are (EE) at the E locus, but there is a variation that occurs in several lines in our breed. The allele EM produces a mask of the same color as the body color on the dog's muzzle. If the dog has tan points, the tan on the muzzle is displaced by the mask. On dogs with a copy of the black gene B, the mask is black. If they are blue merles, the mask is merled also. Dogs that are homozygous for red (bb) have red masks, and red merles have red merled masks. This mask is not specifically mentioned in the standard, but it is not uncommon, either in the show ring or out on the ranch.

Both of these black tricolors have comparable color and markings. Shasta has the E locus mask and Hiccup does not. Notice how the black mask displaces Shasta's tan points. Of course, the effect is partially obscured by the white on the muzzle, but there is still plenty of the mask showing to identify it. The allele EM, which produces the mask, is recessive to the more common allele E. Shasta's genotype with respect to the E locus is (EMEM). Hiccup's is probably (EE). 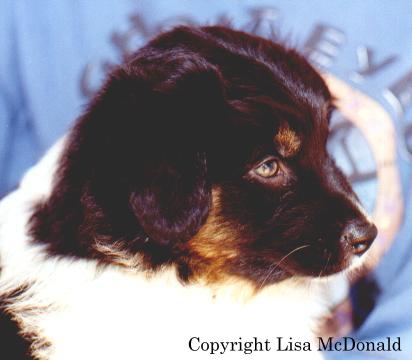 Slydrock's Jersey Girl "Jersey Girl", shown at 7 weeks, is owned by Elicia Calhoun. She shows a rich black mask without white obscuring it. Her genotype with respect to the E locus is probably (EMEM). 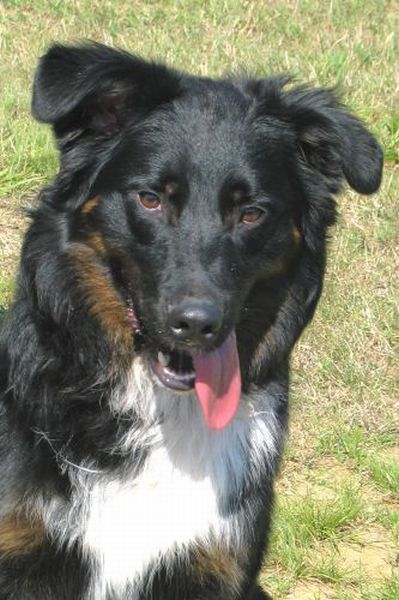 This is Blowski, a black tricolor sent in by Tina Hartley. His black mask is quite extensive like that of a Belgian malinois. It has even covered up the "shepherd spots" over his eyes. What appear to be lighter colored spots over his eyes are actually hairless areas where additional vibrissae emerge. The tan on his cheeks and shoulders is rich and dark and easily seen. 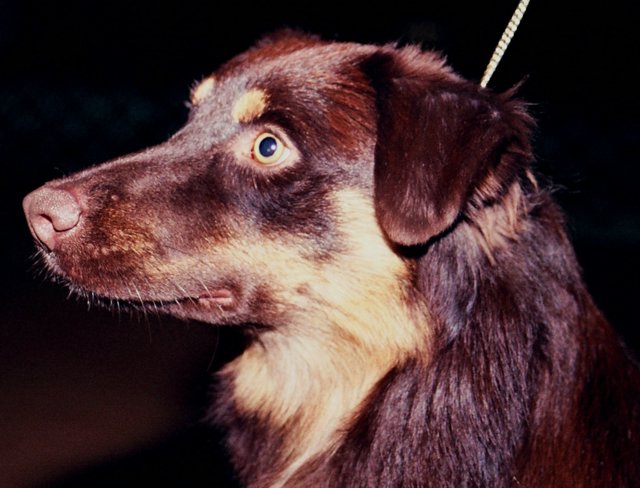 This is Cocoa, gorgeous red tri with very minimal white. Because her body color is red, her mask is red also. In her case the tan points do contrast in color with her body color, so it's easy to see where the tan on her face disappears under the red mask. In contrast to Blowski, Cocoa has a smaller mask that does not extend as far onto the head. 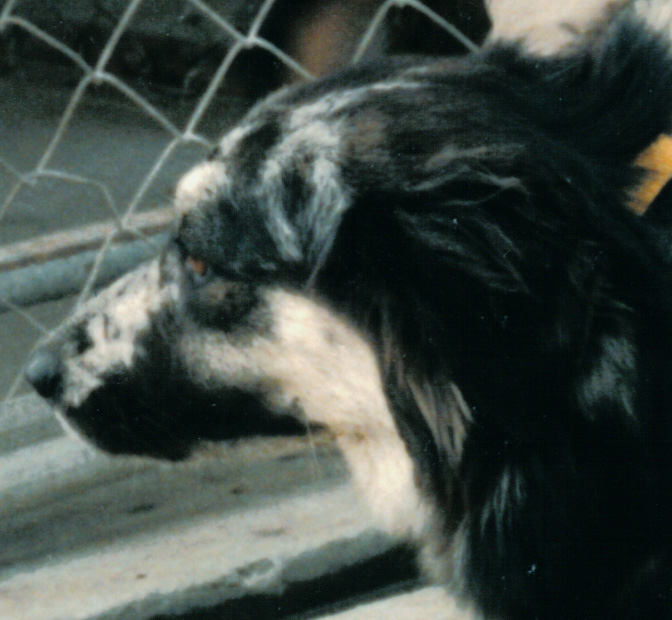 This girl is a tweed merle who also has an E locus mask. In a nonmerle the mask would be black or red, as it is in the dogs above. In her case the top half of the mask is blue merle and the lower part is black. Her mask is not as extensive as Blowski's. It does not cover up her rather large spots of tan over the eyes.