Black is one of the four main colors in the Australian shepherd. Here are some examples of the variability in appearance of Aussies whose body color is black. Some have generous trim and some have no copper or white trim at all. Both trimmed and untrimmed Aussies are fully acceptable in the Aussie standard. Self blacks and blacks with minimal white tend to be found more often in working lines. 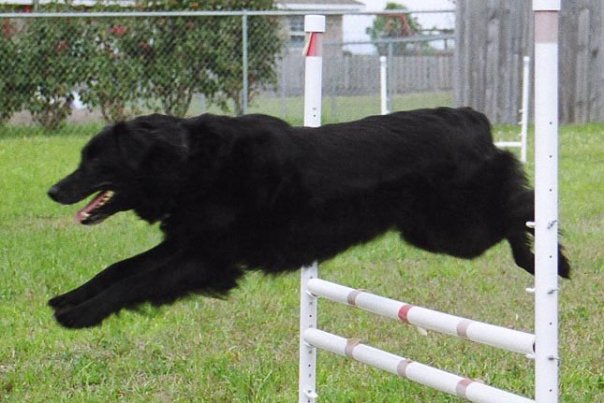 This is the author's self black Fairoaks Obsidian Jaguar "Jag" at 7 years. Jag is a uniform glossy black and lacks tan points and white markings. She has a few random hairs on the front of the chest but shows no Irish spotting pattern. Even her eyes are very deep brown. She would be considered a self black or a very minimal black bi if one wants to split hairs! Her probable genotype is (at at  B-  K-  mm  S si). 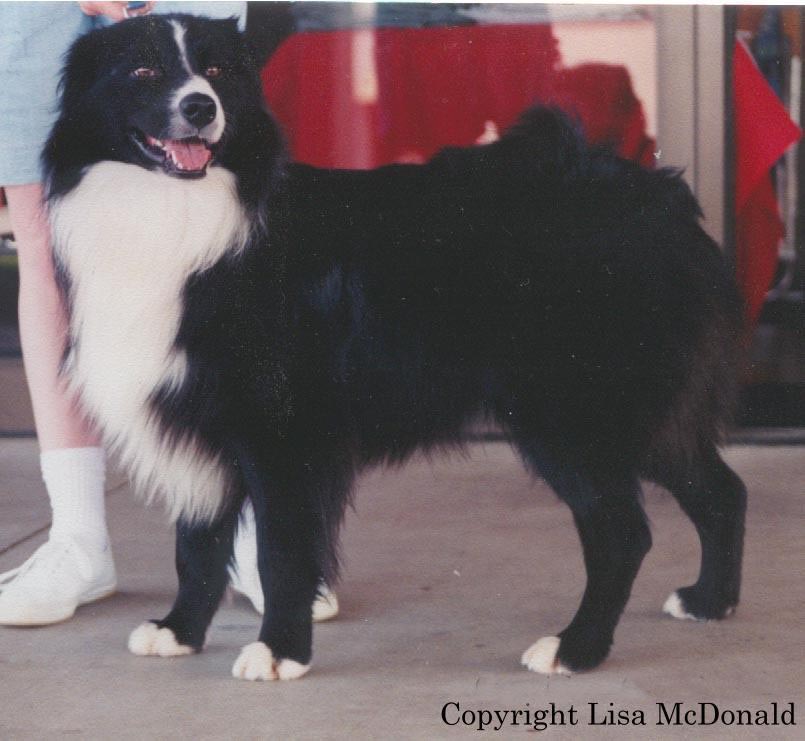 Hamilton's Mark of Windsor "Burt" is a very handsome black bi. He shows a generous Irish spotting pattern and has no tan point pattern. His white areas are clear and show no signs of ticking. His probable genotype is (at at  B-  K-  mm  si si  tt). 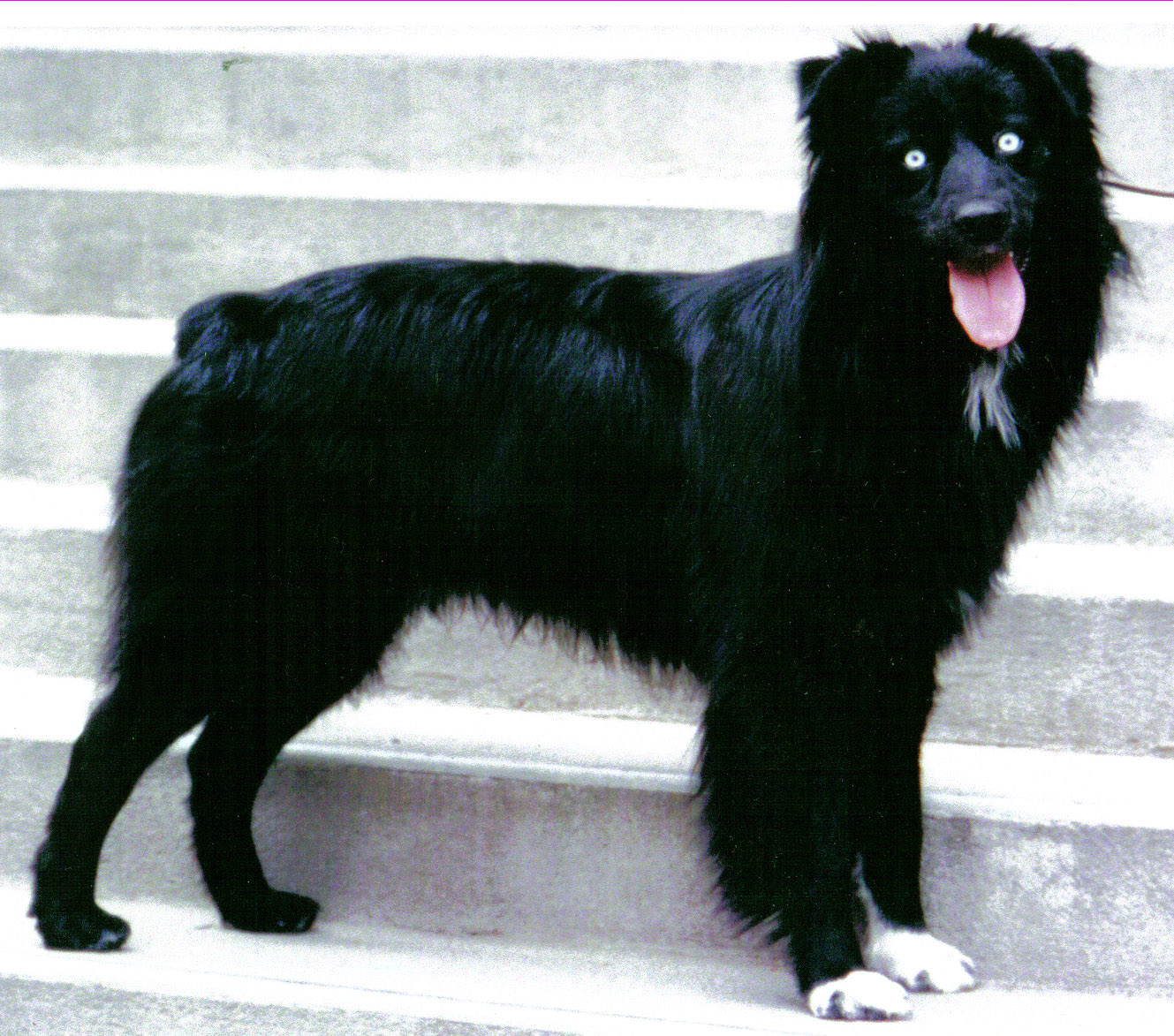 This is CH Howard's Wanagi Ishna Ghost Eyes "Indy". He is almost entirely black with a few white hairs on his toes and chin. He is a very minimal black bi. The presence of blue eyes does not always indicate a merle. This type of recessive blue eye can be observed both in merles and nonmerles. In Aussies, recessive blues like this are caused by a recessive gene similar to that found in Siberian huskies and Border collies. Recessive blues can be entirely blue like Indy's, or they can be geometrically split. They are not marbled. 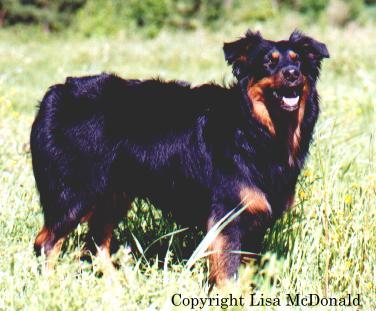 Slydrock's Solar Power "Suni", owned by Elicia Calhoun, poses in a grassy field. Suni is almost a perfect black and tan. She does have a small white chest patch and a small white belly patch, so she is a minimal black tricolor. Her probable genotype is (at at Bb kk mm S-). She could have the gene for ticking, but there's no way to tell since she has so little white. If present it would show up in offspring with enough white to make it visible. 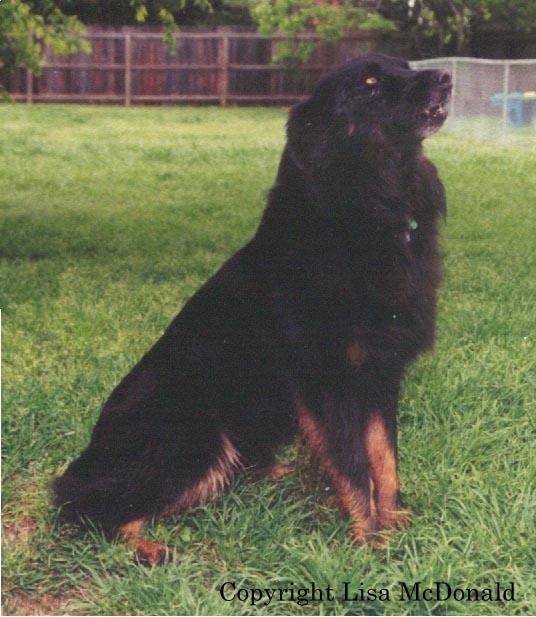 Jake, owned by Leona Stabler, is a true black and tan Aussie. He has no white on him anywhere, and even his tan points are smutty. He also has black spots on his tongue. His eyes are orange brown, giving him a very commanding appearance. His probable genotype is (at- B- kk mm S-). 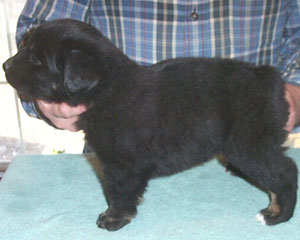 This is a photo of a 5 week old black tri puppy, courtesy of Sandy Cornwell. This puppy has very little white; it is limited to the tips of his toes. He also has very minimal tan points. If there is a question about whether tan points are actually present or not, look under the tail. Even a pup with very reduced tan points will have tan around the anus if the tan point pattern is there at all. His probable genotype is similar to Jake's. 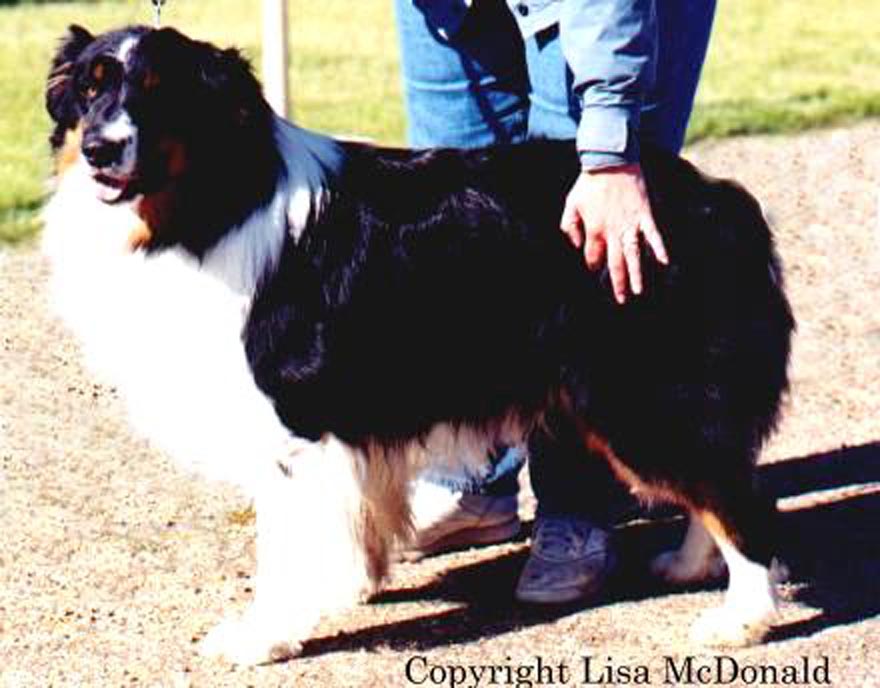 Chaucer is a handsome black tricolor with generous expression of the Irish spotting pattern. His eyes are dark amber. He appears to have a small tick mark on his upper front leg. His probable genotype is (at- B- kk mm sisi).