Red merles show all the variation that blue merles do, and some have merled areas that can be surprisingly light in color. There is not yet a generally accepted term for the merled area of a red merle. It can vary in color from a light champagne to a sugar & cinnamon mixture to a lighter shade of red than the base body color. Some are a rich warm sienna red, while others are a cooler burnt umber or liver red. The merle coverage can vary from near totality to cryptic, just as it does with blues. 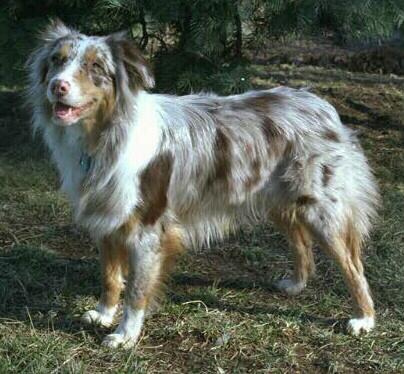 Dave & Chris Adams' "Cappuccino" is a lovely red merle with silvery merling, tan points, and white trim. Her amount of merling is considerable, as her patches of liver are small and nicely spaced. The Irish spotting pattern is well represented on her collar, feet, and blaze. Her probable genotype is (atat bb DD kk Mm sisi). 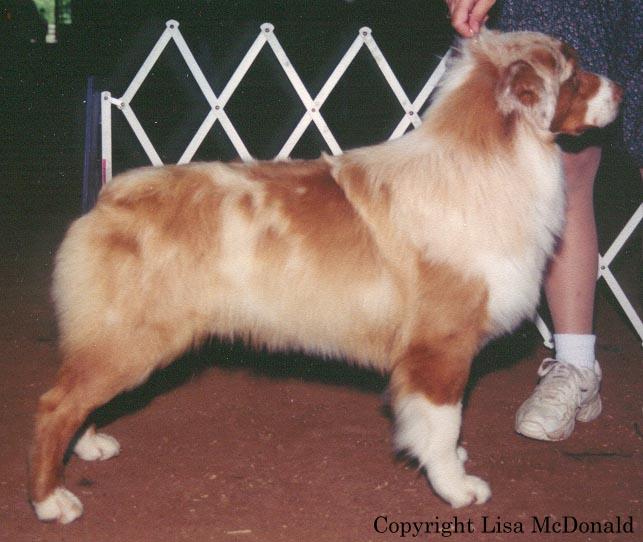 Heidi Mobley's dog Crocker's Jack of All Trades "Jack" is a much lighter shade of red, almost a sorrel. He has tan points and expression of the Irish spotting pattern. His merled areas are more of a champagne to light red. Note the side of his neck in particular. The very light merle is distinct from the white on his chest and front of his neck. Yet, at first glance, it looks as if his collar goes all the way around. Note also that his tan points are almost as dark as the dark red patched areas. Tan points can vary from a light sand to a deep copper; his are toward the darker end of the spectrum. His probable genotype is (atat bb DD kk Mm sisi). 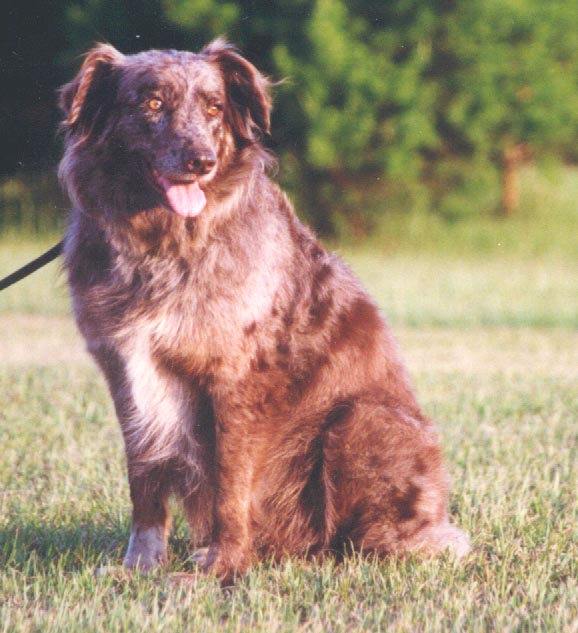 Mattie, a lucky rescue girl, is close to being a self red merle. Her only visible white is a small area on her chest and a white front foot. She lacks tan points, so she would be called red merle and white. Red merles can darken with maturity just like blue merles do, and she possibly is doing so. Her probable genotype is (atat bb DD K- Mm sisi). Dominant K is suppressing her tan point pattern. At the S locus she could also be (S-) with minus modifiers pulling pigment away. 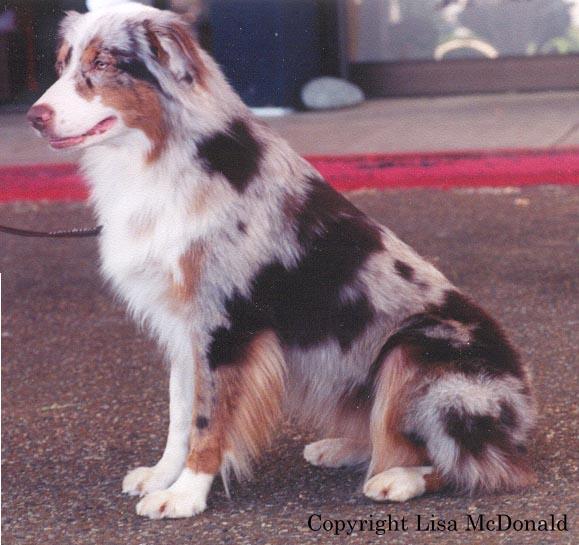 Dezi is a striking dark liver merle belonging to Debbie Collins of Krossfire. Her body color is a much cooler shade of red, resembling burnt umber. There are probably multiple modifiers which act upon the red gene to produce warmer and cooler shades. Note the much warmer tone of her tan points compared to her body color. Part of her unique beauty is the juxtaposition of cool and warm tones. Tan points are unaffected by the merle gene, and hers are darker than her base body color. Her probable genotype is (atat bb DD kk Mm sisi). 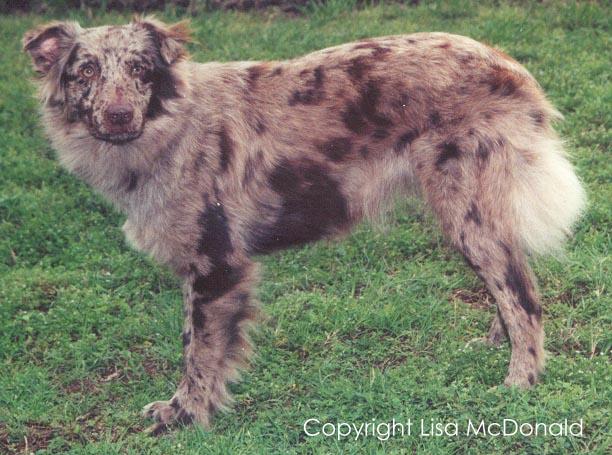 Ronnie Bates and Wayne Kirby pose Pincie Creeks Aggie's Magic, CD "Aggie". Aggie is a self red merle. She has no tan points and no white, not even on her toes. She is merled from one end to the other. Her probable genotype is (atat bb DD K- Mm S-).