A GALLERY OF NOSES

Nose pigmentation is important to protect the dog from sunburn and skin cancer. It's also quite useful in identifying a dog's actual color. Genetically black dogs have black noses and genetically red dogs have liver noses. A black nose on a reddish dog is a red flag that the "red" isn't really red. It may be a yellow or a sable instead. The more pigment a dog has on his nose leather the better UV protection he gets. Pink noses can be spritzed with sunscreen before an outing, but it's better in the long run to breed away from unpigmented noses. The amount of pink coverage on noses tends to be more pronounced in breeding programs where there is active selection toward maximum allowable white markings. Dogs with minimal to no white markings seldom have unpigmented noses. Many puppies that have a few small pink areas on their noses will have them fill in with pigment by the time they are a year or so. 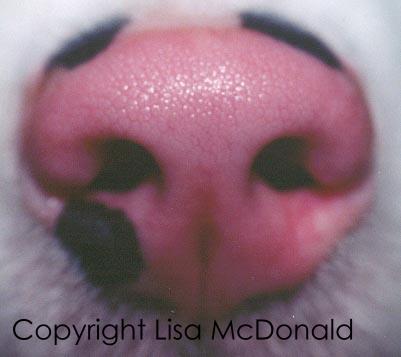 This pink nose belongs to a homozygous merle, though dogs of other colors can have them also. Her nose is almost completely unpigmented with only a few black spots. This comes very close to being a Dudley nose, a nose that is entirely pink. However, if pigment spots are present, the term is "Butterfly nose". This is a very minimal expression of the butterfly nose. In most hound breeds pink noses are disqualified due to the belief that lack of pigment also means a reduced number of scent detection cells; a pink nosed hound is believed to have inferior scenting ability compared to a hound with normal pigment. This dog would need some sunscreen spritzed on her nose before going to the beach or any other high glare environment.

This is a more typical butterfly nose. The pattern of pigmented and unpigmented skin reminds one of the color pattern on a butterfly's wings. The pink areas are prone to sunburn, so this dog would also do well with sunscreen on the nose before a trip to the beach. In a puppy under one year of age this would be acceptable, but by a year of age it should have filled in and be fully pigmented. 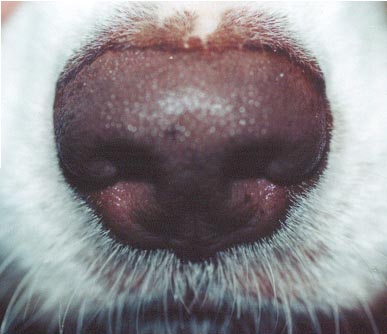 This is a highly desireable totally pigmented nose. In this case the color is liver, identifying this dog as red. Note that the bare skin just above the nose is also mostly pigmented. This is ideal, since there is adequate pigment to protect the skin of the nose and the bare skin of the muzzle directly above it. 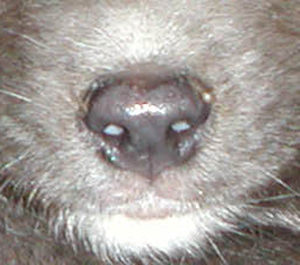 This is the nose of Rufus, a diluted black bi (he would be called blue bi). His nose is a slate gray, typical of dogs with the dilution gene (dd). A red dilute would have a pale liver nose.

Color Change Over Time on a Nose

This is a series of nose pigment color changes over a span of approximately 3 1/2 years. Photos of Fibi (Fibi CGC FM ) are courtesy of Tanya. The breed standard allows unpigmented areas on a puppy's nose as long as they fill in with pigment by the first year. This is the sequence of increasing pigmentation of Fibi's nose as she matured. Fibi was a red tricolor. 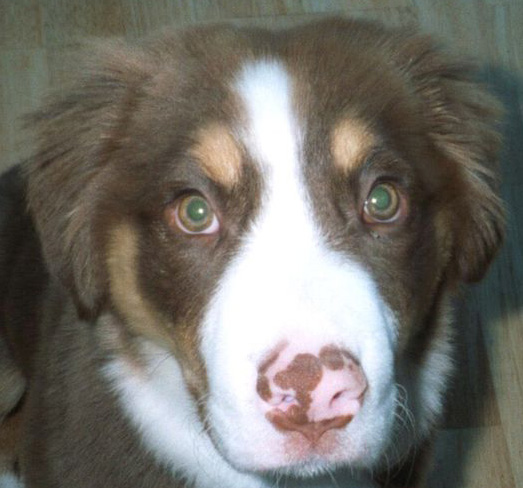 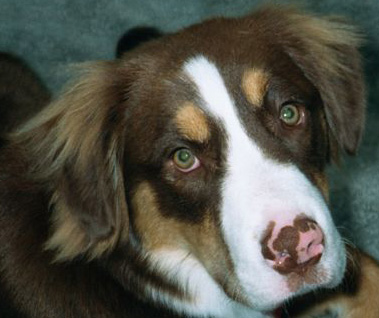 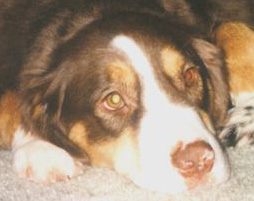 From left to right we have Fibi at 4 months, 1 year, 2 1/2 years, and 3 years. At 4 months she had very disctinct liver splotches that covered approximately 50% of her nose leather. By the time she was 1 year old the pigmented spots were still distinct from each other, but they have expanded very slightly in coverage. By 2 1/2 years a more dramatic change has taken place; the pigment splotches have coalesced and cover approximately 80% of her nose. By 3 years the pigment coverage is almost complete. Her untimely loss prevented us from finding out whether pigment progression would continue past the age of 3.