Our breed standard is quite specific about the shape and placement of pupils. There are some eye defects that occur in frequently enough in Aussies that opthalmic screening of breeding stock is a necessity. Many times eye abnormalities are found in homozyogous merles. However, eye defects are certainly not limited to them, so dogs of all colors should be screened yearly. This is a partial catalog of eye defects readily observed without ophthalmic instruments. More will be added as clear photos become available. 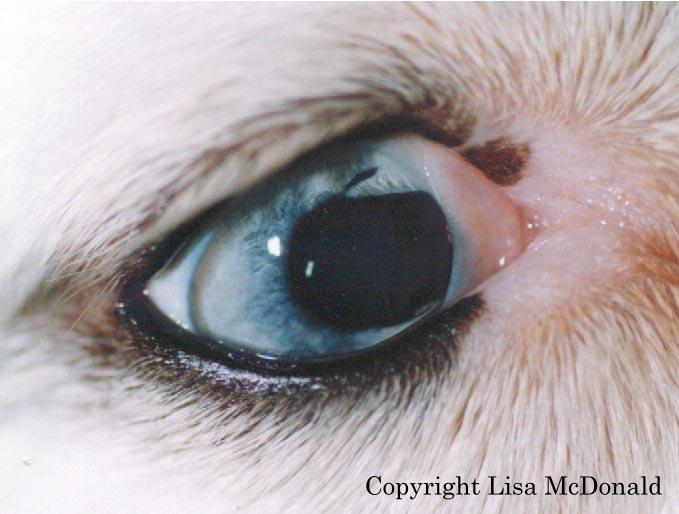 Vicky was a homozygous merle with blue eyes. Notice that a large piece of iris on the right side of the pupil is missing. This incomplete development of the iris is called iris hypoplasia. It is not uncommon in homozygous merles, though it can occur in other dogs also. Vicky had missing pieces of iris in both eyes. She also had a coloboma at about the 1 o'clock position in her iris. She tended to squint in bright light since her irises could not close down adequately to block out the excess light. She wasn't sure she liked my getting right in her face with a macro lens, but a piece of bacon on top of my lens convinces most dogs to look at it! 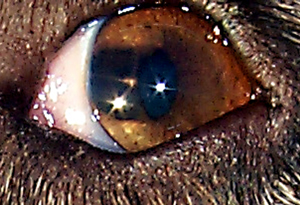 This is also an iris coloboma, this time in a brown eye. The dog is a normal merle, not a homozygous merle. The piece of iris is missing approximately the 8:00 -10:00 position. The point to be made here is that defects are not limited to blue eyes, although because of color contrast they are much easier to see in blue eyes than in other darker colors. 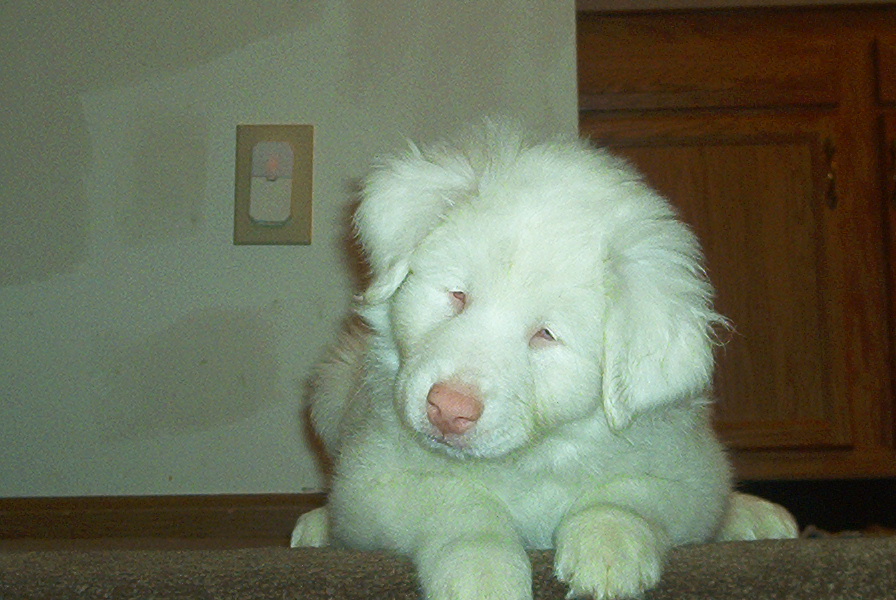 This is a photo of a homozygous merle puppy with microopthalmia (small eyes). Note how small the eyes are compared to those of a normal puppy. One or both eyes can show reduction in size, and one or both eyes can be missing completely (anopthalmia). 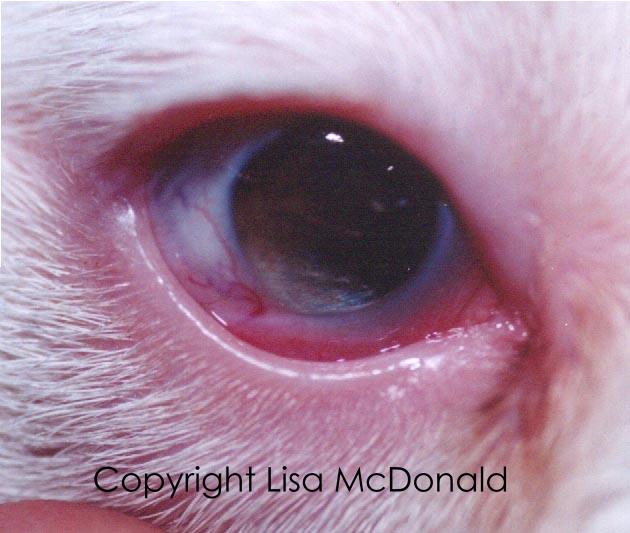 This is the eye of a red homozygous merle. She has micropthalmia, an abnormally small eye. Her right eye, shown here, is about 30% smaller than her left. Her acuity of vision on this side is questionable. Micropthalmia is not uncommon in homozygous merles. In this case only one eye is so affected, but both eyes can be excessively small or even missing completely. 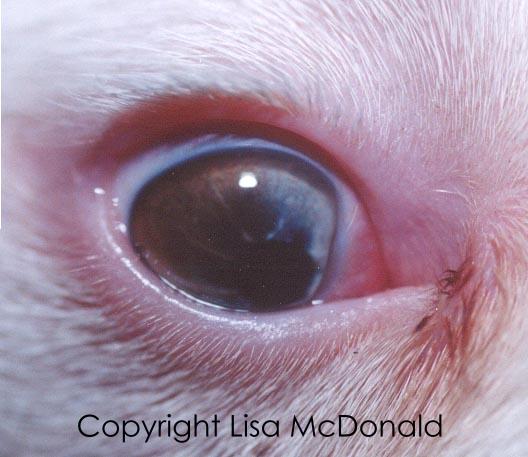 This is the same eye pictured above. Not only is it too small, it also has an eccentric pupil. The pupil is round but not centered in the iris; it is located in the bottom 1/3 of the iris. It gives this dog the impression of always looking downward, even if her eyes are pointed at the viewer. The blood vessels in the iris appear swollen as if the eye is irritated.

This is the left eye of the same dog. It is of normal size, but this eye also has an eccentric pupil. The pupil occupies the lower half of the iris. Note that an eye does not have to be blue to be affected. Most of this eye is medium to dark brown. It's just that a blue iris makes the defect easier to spot. 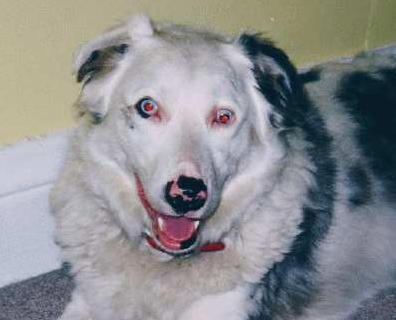 This is Snoopy, a homozygous merle with an eccentric pupil only on his left side. His right eye has a perfectly centered pupil and it points directly at whatever he is looking at. The eccentric pupil tends to give the impression that he is looking down, since it is in the bottom half of his iris. Not all eye conditions are bilateral; sometimes only one eye is affected. 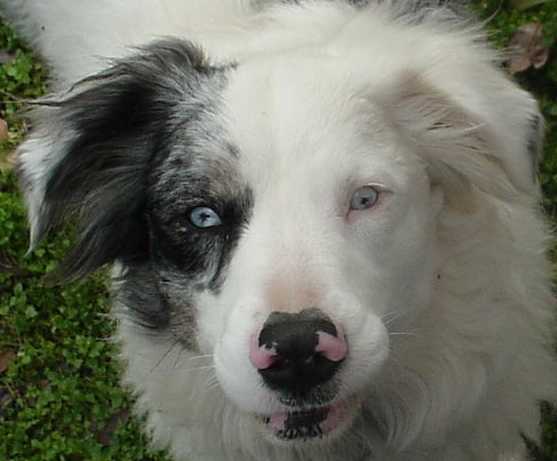 This is Tess, photo courtesy Joann Starks and owner Rhonda Muller. Tess has two eye conditions common to homozygous merles. Her pupils are not round. They seem to send out rays into the iris, like a child's drawing of the sun with rays projecting out. These are sunburst pupils. Dogs with sunburst pupils may be somewhat light sensitive in bright light because the pupil doesn't efficiently close down to exclude light like a normal one does. She also has an eccentric pupil on her left (white) side. The pupil is off center; it is located in the bottom 1/2 of the eye and appears to be looking down compared to the right eye. 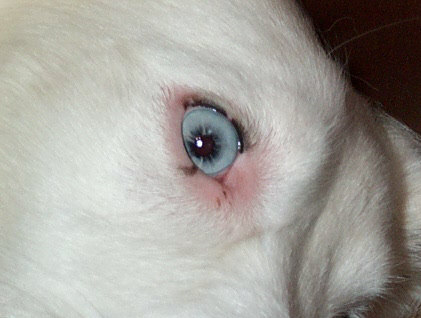 This is a closeup of a starburst pupil on "Aysia", courtesy of Staici Roehm. It looks like a child's drawing of the sun with radial rays coming out from the center. Dogs with starburst pupils vary in their visual acuity, with some able to catch frisbees and work stock. But most are light sensitive and squint a lot because the pupil is not able to constrict efficiently in bright light. The ASCA Genetics Committee had a very dark homozygous merle whose eyes were dark brown with sunburst pupils. They are not limited to blue eyes. 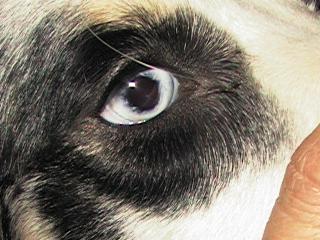 Skye (photo courtesy Annette Jaeger) has an irregular pupil. Notice that it has rough edges like a torn piece of paper. A correct pupil is perfectly round and positioned in the center of the iris. Skye is a homozygous merle. 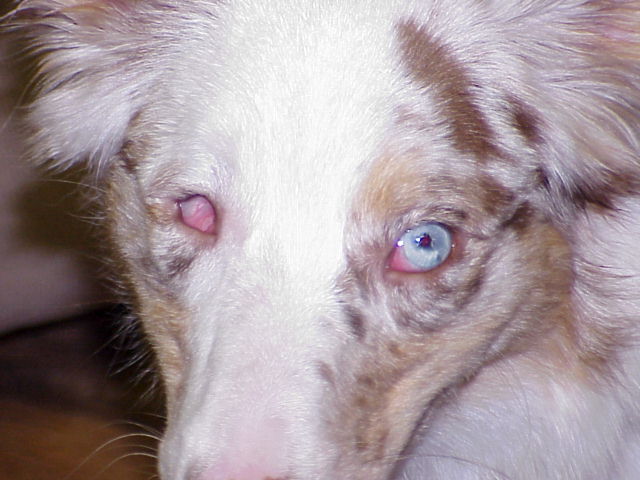 This is Clover, a homozygous red merle, photo courtesy of Joann Starks. Her left eye looks almost normal, though she does have PPM (persistent pupillary membrane), detectable only with an opthalmoscope. Her right eye is tiny and underdeveloped. It does react to a hand waved in front of it, but she has no useable vision on that side. This tiny eyeball is covered permanently by the third eyelid. Some homozygous merles lack even a rudimentary eyeball on either side, though that would be at the extreme end of the scale. 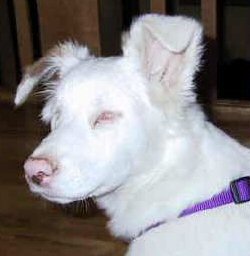 This is Lulu, a rescue photographed courtesy of Jayne McQuillen. She is a homozygous merle, and she has no eyes at all. Total absence of eyes is called anopthalmia. Her eyelids are normal and she appears to have the inner eyelid. But there is no eye underneath that tissue on either side, and her blindness is total. Eyes develop very early in embryonic life, so their development arrested at a very early stage. She navigates familiar household objects well by scent. 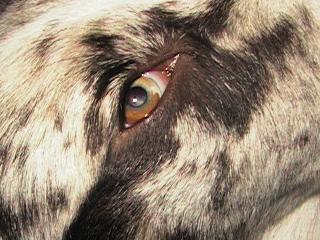 This dog has an incipient cataract. Note the clouding at the bottom half of the iris. An incipient cataract is one that is not yet mature and does not totally block the dog's vision yet. At the mature stage the lens is totally clouded and the pupil looks pale rather than black. Congenital juvenile cataracts are found in our breed, and they can be seen by an opthamologist long before they are visible to the unaided eye. Because the cataract is small, allowing light to reach the retina, his pupil opens and closes normally. 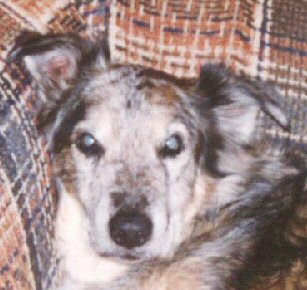 This is Braunauge Silver Nitrate (Braun) with mature cataracts. He had them in both eyes, though one developed much faster than the other. At this stage the entire pupil was uniform cloudy white and his visual acuity was gone. He was able to distinguish light and dark, and some large shapes at this stage, but he was navigating almost entirely by nose and ears at this point.

This dog has a cataract in his right eye that is at the hypermature stage. Once a cataract becomes hypermature it has a "cracked" or "stained glass window" appearance to it that is easily seen by the unaided eye. It is white in appearance, but the flash makes it appear red in this photo. Often at this stage the dog's functional vision is gone and he may suffer from a painful inflammation called uveitis as the proteins from the cataract leak from the lens and irritate the eye. Treatment of uveitis consists of steroid and nonsteroid anti inflammatory eye drops to keep the dog comfortable. Atropine drops are also used to keep the pupil dilated so the lens does not stick to the iris (Dr. Deisic, DVM, Texas A&M Vet School's opthamologist). 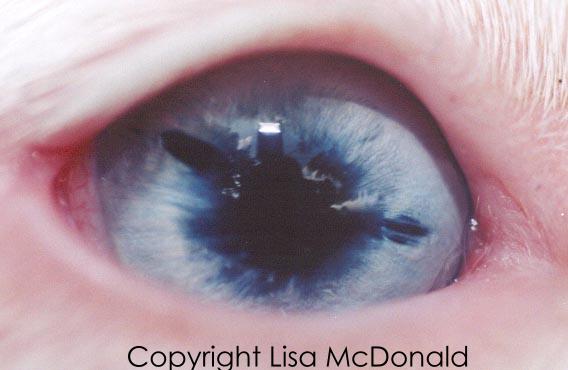 This is a homozygous merle. Her pupil appears to be very irregular in shape and she appears at casual inspection to have colobomas at the 3:30, 10:00 and 12:00 o'clock positions. However, she has been examined thoroughly by an opthamologist and what appear to be holes in the iris are actually just dark pigment. Her pupil is normal and her eyesight is within normal limits. I included this example to show that things are not always as they seem. A good veterinary checkup is a must in questionable cases.